Recep Tayyip Erdoğan is one of a crop of present-day political leaders who value the respectability an ostensibly democratic election confers but don’t want to risk actually losing the vote, the Guardian’s Simon Tisdall writes:

Worried politicians in Paris, Berlin, London and Washington no longer see a reliable friend and ally in Ankara. They see an autocratic figure exploiting nationalist and neo-Islamist sentiment, xenophobia and Europhobia, and feelings of public insecurity brought on by next door’s Syrian crisis, to justify egregious human rights abuses, institutional vandalism and anti-EU, anti-western policies.

Like Turkey under Erdogan’s ruling AK party, Indonesia has also been held up as an exemplar of the compatibility of democracy and political Islam. But although the presidential election is more than a year away, the rising noise of political Islam is taking on ominous overtones for the incumbent, President Joko Widodo, Asia Sentinel reports. 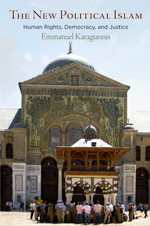 Islamists have endorsed human rights, democracy, and justice to gain influence and mobilize supporters, according to Emmanuel Karagiannis, a Senior Lecturer in King’s College London’s Department of Defense Studies.

Islamist political parties and groups are on the rise throughout the Muslim world, constituting a new political Islam that is global in scope and yet local in action, he writes in The New Political Islam: Human Rights, Democracy, and Justice. Many Islamists turn to activism, still more participate formally in the democratic process, and some, in far fewer numbers, advocate violence—a wide range of political persuasions and tactics that reflects real and perceived political, cultural, and identity differences. 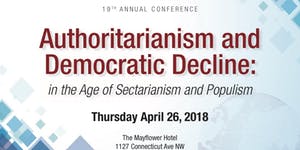 Egypt and the Contradictions of Liberalism, Interpreting the Iran-Saudi Rivalry and the Rise of Sectarianism, and Challenges to Democratic Consolidation in Tunisia are among the panels at The Center for the Study of Islam & Democracy’s 19th Annual Conference – ‘Authoritarianism and Democratic Decline in the Age of Sectarianism and Populism’, CSID, Thursday, April 26, 2018 from 8:30 AM to 5:30 PM (EDT), Washington, DC.

The future of political Islam: Trends and prospects

Since the 2011 Arab uprisings, the progression of events in the Middle East has provoked new questions on the role of political Islam in the region, the Brookings Center for Middle East Policy notes:

The Arab Spring offered Islamist parties the opportunity and challenge of governance, and the widely varying results led many observers to reconsider basic assumptions on political Islam. Lines drawn between ideology and politics have become blurred. Common conceptions of Islam and the nation-state as incompatible have come under review. As scholars and Islamists alike imagine the future of political Islam, these considerations and others will play a central role.

On April 24, the Center will host a discussion on the state of political Islam and the questions and myths which surround its development.