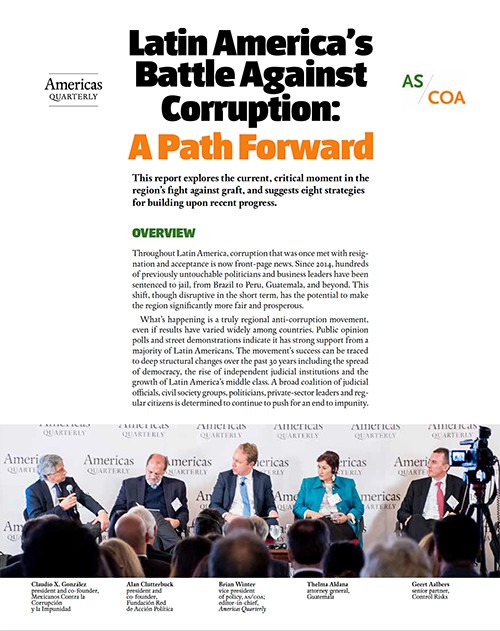 The British government refused to assist a French investigation into suspected money laundering and tax fraud by the UK telecoms giant Lycamobile – citing the fact that the company is the “biggest corporate donor to the Conservative party” and gives money to a trust founded by Prince Charles, BuzzFeed reports:

When BuzzFeed News first approached HMRC to ask about its response to the French request, the agency’s senior press officer strongly denied that Lycamobile’s donations would ever be cited as a reason not to conduct criminal raids. “No HMRC official would ever write such a letter,” he said. “This is the United Kingdom for God’s sake, not some third world banana republic where the organs of state are in hock to some sort of kleptocracy.” However, after verifying the contents of the email seen by BuzzFeed News, another HMRC spokesman said that it was “regrettable”.

Latin America’s Battle against Corruption: A Path Forward – (above) a new report from AS/COA and Americas Quarterly – suggests eight ways to build upon recent progress in the region’s fight against graft. Read the report.

The book argued that corruption and authoritarianism in Russia in recent decades were not byproducts of the country’s emergence from communism but rather building blocks of a plan devised in the early 1990s by Mr. Putin and a circle of trusted associates, the New York Times reports:

The book made accusations so weighty that Cambridge University Press refused to publish it for fear of being sued by Mr. Putin or his allies under Britain’s restrictive libel laws. …[Dawisha] noted in a letter that Mr. Putin’s friends had succeeded in building channels of influence in British institutions, prompting Cambridge University Press to “cower and engage in pre-emptive book-burnings as a result of fear of legal actions.”

“These Kremlin-connected oligarchs feel free to buy Belgravia, kill dissidents in Piccadilly with Polonium 210, fight each other in the High Court, and hide their children in British boarding schools,” she wrote.

Western governments began to embrace her central thesis: that a network of corrupt oligarchs centering on Mr. Putin formed the basic structure of his political system, the Times adds.

“What wasn’t understood was that it went back to this St. Petersburg inner circle,” said Charles G. Davidson, the executive director of the Kleptocracy Initiative at the Hudson Institute in Washington. “The contention in Karen’s book that was so controversial at first — much less so now — is that there was a plan all along by Putin to take over the place.” 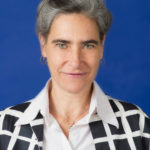 Because kleptocratic networks are transnational, anti-corruption alliances outside a country’s borders are also vital, according to a new paper from Carnegie’s Sarah Chayes (right). In Fighting the Hydra: Lessons From Worldwide Protests Against Corruption, she outlines several lessons for activists who wish to challenge corrupt systems, including:

How did kleptocracy affect the trajectory of democratic development in Russia? the National Endowment for Democracy’s Melissa Aten asked analyst Lilia Shevtsova (right).

It seems to me that there are two important points, Shevtsova argued.