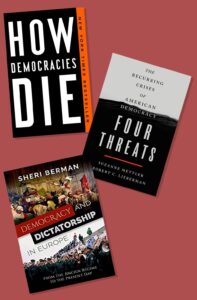 Democracies are backsliding amid the coronavirus pandemic, according to recent reports.

The idea of democratic backsliding illuminates a process that’s at work in democracies today: the erosion of formal institutions, which can make it virtually impossible to hold politicians accountable, thereby eroding democracy itself, notes Didi Kuo, the associate director for research and a senior research scholar at Stanford University’s Center on Democracy, Development and the Rule of Law:

Ellen Lust and David Waldner, in a 2015 USAID white paper, described the process of democratic backsliding as comprising “changes that negatively affect competitive elections, liberties, and accountability.” Nancy Bermeo, in a 2016 article in the Journal of Democracy, defines it as a “state-led debilitation or elimination of the political institutions sustaining an existing democracy.”

Together, three books – Sheri Berman’s Democracy and Dictatorship in Europe, Suzanne Mettler and Robert Lieberman’s Four Threats: The Recurring Crises of American Democracy, and Steven Levitsky and Daniel Ziblatt’s How Democracies Die –  challenge the assumption that democracy is assured simply because it is extant or longstanding, she writes for American Purpose.

The political conflicts that produced democracy involved struggles for power, control over institutions, and demands for recognition and dignity. But the powerful, even when they cede power, do so in ways that benefit themselves. As a result, democracy is always a precarious compromise, argues Kuo, the author of Clientelism, Capitalism, and Democracy: The Rise of Programmatic Politics in the United States and Britain.