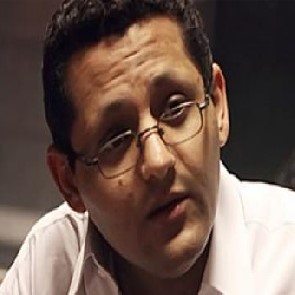 Democracy and human rights activists are expressing concern over the arrest of the brother of a prominent journalist, in the latest of a series of cases which have “chilled” Egypt’s media.

Egyptian authorities must immediately release Kamal el-Balshy, the brother of Darb editor Khaled el-Balshy (right), a former board member of Egypt’s press syndicate, and stop harassing the families of journalists, said the Committee to Protect Journalists:

On September 20, state security forces arrested Kamal el-Balshy, who works at an international travel agency, while he was returning home from the gym in downtown Cairo, according to a statement by local news website Darb. On October 1, the state prosecutor’s office charged el-Balshy with illegal assembly, membership of a banned group, spreading false news, and misusing social media, and ordered him detained for 15 days pending trial, according to Darb and news reports.

The Arab Network for Human Rights Information, a regional rights group, characterized the arrest as retaliation for the work of his brother Khaled el-Balshy, editor-in-chief of Darb. Mahmoud Kamal, a local journalist and member of the board of directors of the Egyptian Journalists Syndicate, also believes the arrest is retaliatory for his brother’s journalist work, according to Darb.

DEMOCRACY ALERT –> The World Movement denounces the unjust detention of the brother of Darb editor Khaled el-Balshy by Egyptian security forces. The government of Egypt must cease its persecution of independent journalists. https://t.co/lisy8hSpfb

“Egyptian authorities must release Kamal el-Balshy immediately and stop their harassment of Darb and its editor, Khaled el-Balshy,” said CPJ’s Middle East and North Africa representative, Ignacio Miguel Delgado. “Journalists should be allowed to work freely, without fear that they or their relatives will be jailed. Targeting a journalist’s family is completely unacceptable.”

The CPJ ranks Egypt among the world’s worst jailers of journalists, along with Turkey and China.

A number of Egyptian journalists have called on the country’s Journalists’ Syndicate to immediately intervene and protect its members, the Middle East Monitor reports. Scores of journalists have been urged to stop covering protests and other unrest as a result of a police crackdown and the arrest of their colleagues. Earlier this month, the Arab Media Freedom Monitor said it had documented 39 violations against media and press freedoms in Egypt during September alone.

The government of President Abdel Fattah el-Sissi has squeezed space for traditional media outlets and stamped out nearly all dissent as part of a wide-ranging crackdown. The content of state-owned media is tightly controlled, while most privately owned news media in the country has been acquired by Egyptian intelligence services or supporters of el-Sissi, The AP adds.

“The rate at which journalists are being arrested is unprecedented since Abdel Fattah el-Sisi became president,” said Sabrina Bennoui, the head of Reporters Without Borders’ (RSF) Middle East desk. “The fact this crackdown on media personnel is continuing although the street protests have been suppressed is all the more worrying.” 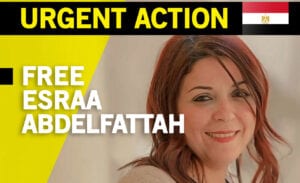 “Filing new charges for crimes allegedly committed while in custody is another way of ensuring that reporters Mohamed Salah, Solafa Magdy, and Esraa Abdelfattah never leave pretrial detention and work freely,” said CPJ’s Sherif Mansour. “These new charges are a clear example of state retaliation against the journalists.” 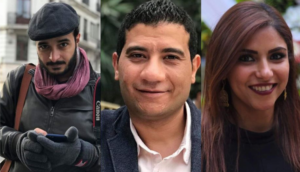 Salah, a blogger and freelance journalist, has been detained alongside his friends, the journalists Magdy and Hossam el-Sayyad, since late November 2019 on charges of membership of a banned group, CPJ adds. The Association for the Freedom of Thought and Expression (AFTE) condemned the Supreme State Security Prosecution’s decision to imprison the three journalists: Salah, Magdi and Hossam El-Sayyad (right).

Magdy, a multimedia reporter who has been held in pretrial detention since November of 2019, heads the One Free Press Coalition’s “10 Most Urgent” list of press freedom cases, according to news reports. The “10 Most Urgent” list, issued this month by a united group of pre-eminent editors and publishers, spotlights journalists whose press freedoms are being suppressed or whose cases are seeking justice. 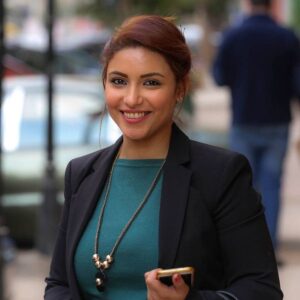 In May 2020, authorities arrested and held incommunicado journalist Shaima’ Samy on charges of “spreading false news,” as reported by Euromed Rights, it stated:

Al Jazeera and Reporters Without Borders reported in May and June 2020 authorities briefly arrested two leading independent women journalists, Lina Atallah and Nora Younis. Solafa Magdy, a journalist, and her husband, Hossam al-Sayad, a photojournalist, were arrested in November 2019 on charges related to spreading false news and are being held in pretrial detention pending investigation into case no. 855/2020. Esraa Abdel-Fattah, also a journalist, is being charged and detained on similar charges.

The International Press Institute has also expressed concern over Ismail Alexandrani, a freelance journalist and researcher whose academic work focused on the Sinai Peninsula and Islamist movements.

“Worryingly, since the sentencing whereabouts of Alexandrani are unknown raising concerns about his well-being,” says IPI, which has repeatedly urged the government of Egypt to release details of his detention and health.”

Journalist and #Sinai expert Ismail Alexandrani is serving a 10-year prison sentence in #Egypt for his criticism of the Egyptian military. I call on Egyptian authorities to #FreeAlexandrani #PressEgypt #JournalismIsNotACrime @AlsisiOfficial https://t.co/X6iLEzGPKe