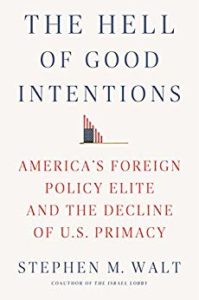 The titles of Stephen Walt’s The Hell of Good Intentions: America’s Foreign Policy Elite and the Decline of U.S. Primacy and John Mearsheimer’s The Great Delusion: Liberal Dreams and International Realities give clear hints of the cases they lay out: against democracy promotion, humanitarian intervention, nation building, and NATO expansion; for restraint and offshore balancing, argues Jake Sullivan, a Senior Fellow at the Carnegie Endowment for International Peace.

The two ‘realist’ foreign policy analysts neglect the rise and threat of neo-authoritarianism, he adds.

This flaw leads to a second hard question, inextricably tied to the first: To what extent are the United States’ main competitors systematically exporting their illiberalism, and what are the implications for U.S. strategy? he asks in Foreign Affairs: 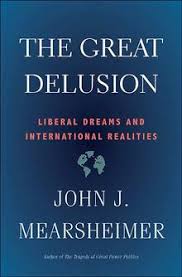 Observers such as Kelly Magsamen and her co-authors at the Center for American Progress are increasingly emphasizing that both China and Russia have an overriding objective of maintaining their authoritarian models, which creates incentives for them to increase the pressure on liberalism abroad as a means of reducing the pressure on their regimes at home. As Thomas Wright of the Brookings Institution has put it, China and Russia “share the objective of targeting free and open societies to make the world a safer place for authoritarianism,” and therefore U.S. foreign policy needs to privilege the defense of democracy in the context of great-power competition.

Both Walt and Mearsheimer presume that the United States’ major competitors are acting largely according to realist dictates, that domestic politics isn’t a major factor, adds Sulllivan, who served as Director of Policy Planning at the U.S. Department of State in 2011–13 and as National Security Adviser to the U.S. Vice President in 2013–14:

As a result, they offer a backward-looking critique of the American “impulse to spread democracy,” as Mearsheimer puts it, without really addressing the challenge of defending democracy against increasingly ambitious, organized, and effective dictatorships. The foreign policy community’s emerging diagnosis may be wrong or overstated, but if it is, neither of these two authors explains why. They don’t deal with the range of practices that U.S. competitors are pursuing to put pressure on the American economic and political system, from direct election interference to the strategic use of corruption and state capitalism as tools for building leverage and influence.

The book’s authors are out of step with an emerging foreign policy convergence of the left and the center, he adds, noting that “some common priorities are coming into focus: an elevated concern for the distributional effects of international economic policy, a concentration on combating corruption and kleptocracy and neofascism, an emphasis on diplomacy over the use of military force, an enduring commitment to democratic allies.” RTWT