With European Union elections closing in, EU leaders are calling for measures to tackle the deliberate spread of disinformation, Associated Press reports.

“The spread of deliberate, large-scale, and systematic disinformation, including as part of hybrid warfare, is an acute and strategic challenge for our democratic systems,” the statement said. “It requires an urgent response,” Reuters adds. 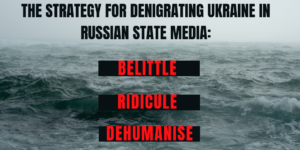 U.S. leaders should keep a close eye on Russian President Vladimir Putin’s cyber sleight of hand. Behind the smokescreen of multi-polar chaos, Putin is ramping up cyber warfare to keep Western powers, including the U.S., from keeping Ukraine from Russian state capture, analyst Robert Johnston writes for The Hill:

Russia needs Ukraine to be aligned not only because of the large ethnic Russian population there, but also because it represents the last line of defense between Moscow and the Western powers, as well as a huge economic partner. In five years, however, if current trends continue, Russia’s economic footprint in Ukraine will be diminished to such a capacity that Putin will either have to concede — or be forced into military action against the West.

The latest findings from the Media Sustainability Index, from 21 European and Eurasian countries, depict a slowly eroding foundation for independent news in the region. Journalists are under threat, financial pressures are a growing burden on editorial independence, and propaganda and disinformation continue to infiltrate news narratives, the National Endowment for Democracy adds:

How can media experts, civil society, and regulators better respond to such sweeping trends? How will they know they are succeeding in a complex and fast-changing information environment? At a recent NED forum (above), IREX Senior Technical Advisor Tara Susman-Peña presented key trends and conclusions from the 2018 MSI and introduced a new framework for measuring complex information systems, stemming from IREX’s vibrant information approach.

Rodger Potocki, Senior Director of Europe Programs at the National Endowment for Democracy (NED), and Nina Jankowicz, Wilson Center Global Fellow at the Kennan Institute, provided insight on the information space more broadly and how audiences understand and evaluate the news they receive.