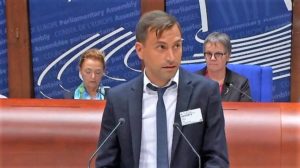 In 2003, a group of young people from Kosovo and Serbia established the Youth Initiative for Human Rights (YIHR) in Belgrade to connect young people from the two countries in an attempt to overcome the consequences of armed conflicts and the resulting inter-ethnic tensions, writes Tanja Dramac Jiries. Since then, independent branches of the YIHR have been established in Kosovo, Montenegro, Bosnia and Herzegovina, and Croatia.

The network has now won the 2019 Vaclav Havel Human Rights Prize for its work on reconciliation in the Western Balkans. The prize was awarded jointly to the entire YIHR Balkan regional network and the Uyghur intellectual Ilham Tohti imprisoned in China. 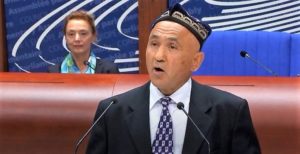 Enver Can of the Ilham Tohti Initiative receives the Prize on behalf of Mr Tohti, who has been in prison in China since 2014: “Today’s prize honours one person, but it also recognises a whole population in giving the entire #Uyghur people a voice.” Credit: Twitter

The YIHR joins an impressive list of individuals and organizations, including a number of National Endowment for Democracy grantees, who have received the award, a prestigious prize awarded to individuals, civil society groups, and institutions for outstanding efforts in defense of human rights in Europe and beyond. The Prize has been awarded since 2009, when it was known as the Human Rights Prize of the Parliamentary Assembly of the Council of Europe. It was relaunched in 2013 by the Parliamentary Assembly of the Council of Europe, Václav Havel Library, and Charta 77 Foundation.

The network’s main objectives are promoting the principles of responsibility, accountability and justice; providing support to the victims of human rights abuses; and fostering cooperation and capacity building among youth. The YIHR in Belgrade acts as the Secretariat of the World Youth Movement for Democracy.

Tanja Dramac Jiries is Program Officer for Europe at the National Endowment for Democracy.