China has launched rule by fear in Hong Kong https://t.co/tLFJPQg6Ax

China’s Communist Party is calculating that control and stability outweigh the benefits that Hong Kong has provided, Alexandra Stevenson and Vivian Wang write for The Times:

Western democracies, historically allies of the pro-democracy movement in Hong Kong, are preoccupied with their own crises. The United States, with its steady retreat from global leadership under Mr. Trump, is in no position to rally them, say supporters of both the protesters and Beijing. 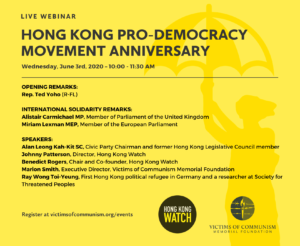 “‘We expect foreign condemnation for everything we do’ basically is their attitude,” said Andrew Nathan, a professor of political science at Columbia University and former National Endowment for Democracy (NED) board member. “‘You guys can bark all you want but you can’t bite, so what do we care?’”

“One country, two systems” was supposed to be a model for Taiwan, a democratic island of 24m that China also sees as its own. The aim was to show that reunification with the motherland need not mean losing one’s liberty. Under President Xi Jinping, China seems to have tired of this charade. Increasingly, it is making bare-knuckle threats instead.

A few activists have clung to hope that China still needs and wants the world’s approval, The Times adds.

“If the rest of the world doesn’t trust China at all, they would have to gang up against China. Is this a way forward for China and for Xi Jinping?” said Martin Lee, a prominent veteran democracy supporter. “We have to persuade them that it is ultimately and eminently in the interest of China that they win the confidence of the rest of the world.”