New: The world failed after Tiananmen Square. We must not fail Hong Kong now. https://t.co/XJrE5N365Q by me @PostOpinions

There is “a very big lesson the American government should learn from 1989,” said Wang Dan, a former student leader who survived the Tiananmen Square massacre. “In 1989, why did the U.S. government lift sanctions so quick? They thought there was still hope for China. They thought that Deng Xiaoping’s economic reforms would definitely lead to political reform,” he said. “There’s only one way to push China to have some real reform, and that’s pressure,” he tells The Post’s Josh Rogin: 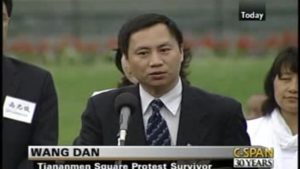 Wang – who spent several years in prison before being exiled to the United States, where he has championed democracy, freedom and human rights for the Chinese people ever since – said the U.S. and international response must target sanctions at high-level officials in Beijing, including under the Global Magnitsky Act, and that issues of human rights and freedom of information in China must be included in any future trade talks. The CCP’s abuses hurt not only Chinese citizens but also U.S. companies trying to do business in China.

The global Covid pandemic is an indirect consequence of the Tiananmen Square Massacre, which also holds lessons for Beijing’s crackdown on Hong Kong, says a leading democracy advocate. If China had conceded demands for such democratic reforms as transparency and accountability, the ruling Communist Party would not have been able to obscure the Wuhan virus outbreak that unleashed a global crisis, said Tiananmen survivor Dr. Yang Jianli of Initiatives for China.

“If the Communist Party, instead of slaughtering the Tiananmen protesters, had accepted their requests for political reform, the world would not have been plunged into the catastrophe we are experiencing today,” he told the Victim of Communism’s Tiananmen Square Massacre Candlelight Vigil (below) in Washington, DC. “This is an example of the principle that when a regime runs roughshod on its own people, it will sooner or later bring disasters beyond its border, one way or another.”

“The difference made by freedom and democracy is not only whether we have a life of dignity and individual fulfillment, but very often the difference between life and death, he added. “The people of Hong Kong know it well. Carrying on the Tiananmen spirit, they are putting their lives on line to defend their freedom and push for democracy.”

On behalf of the bipartisan and bicameral Congressional-Executive Commission on China (CECC), Representative James P. McGovern (D-MA) and Senator Marco Rubio (R-FL), issued a  statement commemorating the 31st anniversary of the Tiananmen protests and their violent repression.

“Renewing our pledge to always remember this tragic anniversary and to work for a day when the brave legacy of the Tiananmen generation can finally be realized in China and around the world,” cited the words of the Tiananmen Mothers: “The hard facts of the massacre are etched into history. No one can erase it; no power, however mighty, can alter it; and no words or tongues, however clever, can deny it.””

Read how the #TiananmenSquare protests of 1989 continue to inspire Hong Kong’s ongoing struggle for democracy in the National Endowment for Democracy’s Journal of Democracy.