In Minsk today Nobel laureate Svetlana Alexievich was called in for questioning, as the authorities try to increase the pressure on their opponents. Camera @AntonChicherov Producer @LizaVereykina #Belarus @BBCNews @BBCWorld pic.twitter.com/XywDGe2nQK

The second-most senior U.S. diplomat wrapped up talks with top Russian officials in Moscow Wednesday — capping a two-day visit aimed at bridging differences over issues including the ongoing political crisis in Belarus and the sudden illness of a leading Russian political opposition figure from what appears to be a poisoning, VOA reports:

Ahead of talks with Russian Foreign Minister Sergey Lavrov, Deputy Secretary of State Stephen Biegun signaled that Washington was not eager to accept efforts by Lukashenko to cast the election standoff as an East versus West showdown that might trigger direct Russian involvement.

“We urge the government of Belarus to accept the OSCE chair’s offer to facilitate dialogue and engage all stakeholders,” Biegun told the Kalinowski forum in Vilnius, Lithuania earlier this week.  “The United States cannot and will not decide the course of events in Belarus. This is the right of the Belarusian people.”

After initially appearing uncertain, Mr Lukashenko has moved to consolidate his position and has crucially kept the security forces and political elite on his side, with only a handful of high-profile defections, AFP reports.

“In terms of Belarusian history, what we have seen has been unprecedented,” said Ms Olga Dryndova, an expert on Belarus at the University of Bremen, Germany. “The protest is broadly represented at every social layer,” she told AFP, adding that people who were never politicized were also backing the movement.

“There never was such large-scale popular mobilisation in the history of Belarus,” added Ms Katia Glod, non-resident fellow at the Centre for European Policy Analysis, saying it exceeded even the outrage that followed the 1986 Chernobyl disaster in neighbouring Ukraine.

Belarus is already a nation reborn, according to National Endowment for Democracy President Carl Gershman. Lukashenka and his cronies simply cannot go back to business as usual after this Belarusian summer of solidarity. They thought that by unleashing terror they would stop the protests. They believed fear would paralyze the people. But they were mistaken. They must now concede defeat and exit the stage. There must be new elections, free and democratic, he writes for the Atlantic Council. RTWT

Belarus reborn: Based on remarks by NED President Carl Gershman to the Kalinowski Forum in Vilnius on August 24, 2020. https://t.co/fbGUU9ftpB #NEDemocracy

Belarusian Nobel Prize-winning author Svetlana Alexievich (see below) says she believes that the political crisis in Belarus could be resolved with assistance from the international community and help from Russia. Alexievich is one of dozens of public figures who formed the opposition Coordination Council last week in the aftermath of the country’s disputed August 9 presidential election, RFE/RL reports:

Her remarks on August 26 came as she arrived at Investigative Committee headquarters in Minsk, where she was summoned for questioning as part of a widening clampdown on opposition calls for the resignation of the country’s longtime authoritarian ruler, President Alyaksandr Lukashenka. “We need assistance from the world and, probably, from Russia in order to overcome this crisis,” Alexievich told journalists. 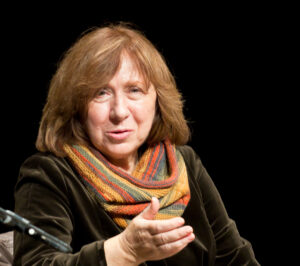 With reports of mounting violence, Polish MEP Radosław Sikorski warned Lukashenka to expect not just sanctions but also the possible intervention of the International Criminal Court (ICC), an idea supported by the opposition-led Belarus’ National Salvation. While there are significant impediments to the Court’s involvement, the impact of such an initiative could be ground-breaking, analyst Kateryna Busol writes for Chatham House.

Deputy Secretary of State Beigun met with Belarusian opposition leader and Lukashenko’s primary opponent in the election Sviatlana Tsikhanouskaya, who fled to Lithuania amid alleged threats to her family from Lukashenko’s security forces, VOA adds.

“It is a democratic revolution,” said Tsikhanouskaya in recent comments. “It is the striving of the nation to decide for itself.”

A giant protest in Minsk at the weekend showed that Lukashenko’s opponents can still muster the numbers. Tikhanovskaya told the EU parliament Tuesday a “peaceful revolution” was in progress, AFP adds.

Belarus civil society “has no intention of going to sleep any time soon,” said Andrei Kolesnikov, senior fellow at the Carnegie Moscow Center.  “His intransigence is a good lesson for dictators in how to retain power in the short term. But it’s a bad example in terms of ensuring his personal safety and a peaceful old age in the medium and long term.”

Workers at state-owned industries have joined the protest movement, staging public meetings, walk-outs, threats of work-to-rule actions, and strikes, analysts Maxim Edwards and Thomas Rowley write for Open Democracy. Researcher Volodymyr Artiukh points out that there have been reports of protest activity at “at least at least 70 industrial, trade and service companies as well as in the educational, medical, and media sectors” since the election. “Almost all of these are state-owned enterprises and/or publicly-financed organisations,” he says.

Under normal circumstances, governments across Europe and the free world—not to mention the brave Belarusians on the streets—would look to Washington to lead the response, both public and private, to such an offense to democracy, add Nicole Bibbins Sedaca and David J. Kramer.

Human rights activists, civil society figures, opposition leaders, and oppressed citizens around the world look to the United States, as they have for years, to speak truth to power in their countries. Far be it from us to tell protesters in Belarus and other unfree countries that they came at the wrong time looking for inspiration and moral support in the United States, they write for The Bulwark.

Deputy Secretary Biegun met with FM #Lavrov and discussed the current situation in Belarus. DepSec Biegun condemned the use of violence against the Belarusian people and expressed support for Belarus’ sovereignty and the people’s right to self-determination. @mfa_russia 1/2