Belarusian authorities have started mass criminal proceedings against more than 200 peaceful protesters who were detained during a rally on Sunday, and are now at risk of being jailed for up to three years, Amnesty International reports.

“The Belarusian authorities clearly fear freedom of peaceful assembly in the country, and are now criminalizing it wholesale, by attempting to prosecute 231 detained protesters in one single case,” said Denis Krivosheev, Amnesty’s Deputy Director for Eastern Europe and Central Asia. “The protesters called their rally on Sunday a March against Terror, and now they are being intimidated by the authorities even further.”

What would it take for the protests to succeed in removing Lukashenko from power? analyst Gennady Rudkevich, an Assistant Professor in International Relations at Georgia College, asks in The Moscow Times:

Conventional approaches to political change in Belarus based on largely symbolic gestures need re-examination, argues Yarik Kryvoi, the founder of the Ostrogorski Centre (or Center for Transition Studies). New approaches should in the first place focus on creating the texture of Belarusian civil society inside the country, facilitating its self-reliance and long-term resilience, he writes for the Belarus Digest. The key features of such an approach could include:

“It is right that other countries help the victims of repression who leave #Belarus..” writes @kryvoi, but “helping active Belarusians to stay in Belarus is equally or even more important than helping those who have left”#BelarusProtesthttps://t.co/6BoS0WT1fS

Independent labor unions have called for an end to layoffs and reprisals against workers who last week took strike action to protest the regime.

“We call on all Belarusian workers to show solidarity and protect their comrades against whose families the ruling regime is inflicting reprisals,” said a statement from the Executive Committee of the Belarusian Congress of Democratic Trade Unions (BKDP).

The ITUC Global Rights Index has ranked Belarus “no guarantee of rights” for many years under Lukashenko’s government, including in 2020, in part because legal strikes are effectively impossible while illegal strikes fall foul of punitive legislation.

Ten days after LabourStart launched a campaign demanding the release of jailed trade union leaders in Belarus which prompted thousands of messages from trade union activists around the world, they have now been freed, the IndustriALL Global Union reports. 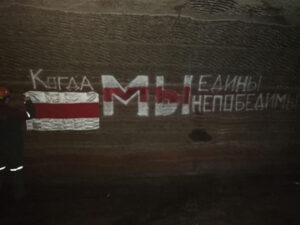 The jailings followed a strike at the JSC Belaruskali potash fertilizer plant, as workers peacefully demanded freedom, democracy and respect. The response of the authorities was to arrest Siarhei Charkasau, a vice chair of the Belarusian Independent Trade Union (BITU), and three others: Pavel Puchenia, Yury Korzun and Anatol Bokun. BITU is affiliated to IndustriALL Global Union.

Mediazona, a Russian media outlet which focuses on the law and justice system, recently received a data archive held by Belarus’ Investigative Committee from an anonymous source, Open Democracy reports. These documents consist of several spreadsheets containing information about individual instances of police violence, as well as inspections concerning reports of torture. Analysis of these documents shows that the minimum number of people injured by Belarusian police during protests in August and September 2020 is 1,373 people.

Media outlets are being targeted too with access to independent sources of information deliberately restricted by the government, notes analyst Volha Siakhovich. In late August, the Ministry of Information ruled to block more than 70 news websites and websites of civil society organisations. After the election, state-owned printing houses refused to print some influential independent newspapers on flimsy or no grounds at all, she writes for Index on Censorship. Despite this, the media continue to do their job: blocked websites disseminate information through “mirrors”, Telegram channels and social networks; print newspapers are distributed by volunteers; journalists support each other.