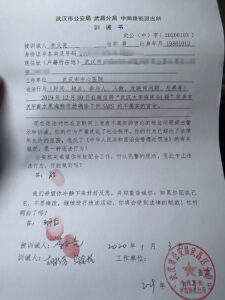 Dr Li Wenliang, whose private post regarding coronavirus went viral on social media, was forced to sign a letter
of admonition issued by Wuhan police in which he admitted to severely disturbing “social order”. Dr Li later died of COVID-19. Image: Wikimedia Commons.

With the Chinese Communist Party’s digital authoritarianism flourishing at home, Chinese-engineered digital surveillance and tracking systems are now being exported around the globe in line with China’s Cyber Superpower Strategy, a new analysis suggests.

The UK should set up a “foreign interference” watchdog to help combat espionage and influence operations by hostile countries such as China, says a paper by Charles Parton, a former diplomat and China expert, on resetting the UK’s strategy towards Beijing against a backdrop of growing security concerns, The FT reports:

Ken McCallum, MI5’s director-general, warned in October that the threat from hostile states was rising, and that while Chinese spies typically targeted commercially sensitive data and intellectual property, his agency had also detected attempts by Beijing to influence European politics. …. “Moving back from the ‘Golden Era’ to a more balanced relationship with China will involve some pain,” Mr Parton writes. “The Chinese Communist party’s (CCP) instincts are to bully. Yet the readjustment must be gone through.” The report’s key suggestion is that the UK should follow Australia’s example in establishing an office to counter foreign interference, which would work across government, industry and academia to highlight risks and crack down on areas of vulnerability.

“What we have at the moment isn’t up to the task,” Mr Parton told the Financial Times ahead of publication. “We need a body looking at the CCP’s activities across the spectrum of political interference, academic partnerships, lobbying, elite capture and more [what the National Endowment for Democracy calls Beijing’s sharp power]. These are things which need to be looked at with a gimlet eye, and the defenses raised.”

China’s pandemic response, underwritten by an expansion of its digital authoritarianism, is a critical part of its efforts to boost its footing on the world stage, says a new Lowy Institute report. With US global leadership on the retreat, but pressure on the CCP mounting, China has found an opening: highlighting the country’s success in suppressing the pandemic and encouraging other countries to deploy Beijing’s pandemic playbook, writes analyst Lydia Khalil:

The COVID-19 pandemic has already shaped the future.[143] Among its many legacies are the normalisation of technological surveillance, the notion of the surveillance state, and China’s opportunistic advancement of its technology agenda. The onus is on democracies to do more to counter the harmful aspects of China’s global technology agenda, and to find ways to harness technology, including AI, for the global public good while preserving hard-won democratic rights and liberties.

The Cold War between the Soviet Union and the United States had an ideology as its core underpinning element, argues Mercy Kuo, Vice President of Strategic Services at Pamir Consulting. This emerging Cold War is not based on ideology, as China is not trying to sell the virtues of communism to anyone, not even to its own population. On the contrary, the rivalry between China and the U.S. is based on the capability shown by each of them to outmatch the other in terms of results. This means that the core element of the current Cold War is efficiency, she writes for The Diplomat.