Bipartisanship is a rare and fragile commodity in U.S. politics, but at least one institution continues to draw robust support from across the political spectrum.

Democrats and Republicans alike expressed their commitment to the National Endowment for Democracy (NED) and appreciation of the contribution made by its founding president, Carl Gershman, on the occasion of his retirement (above). But the NED didn’t always enjoy bipartisan endorsement and even had to counter hostility from both Left and Right in its early days to survive, Marc F. Plattner writes for the Journal of Democracy: 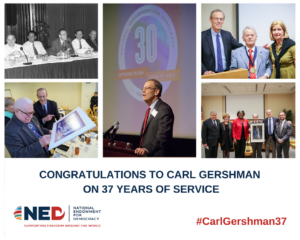 Initially, there was a great deal of suspicion about NED’s political orientation from both sides of the aisle—from liberals who feared it would become an anticommunist operation that would neglect opponents of right-wing dictatorships, and from conservatives who feared that it would undermine authoritarian regimes friendly to the United States. Under Carl’s direction, NED proved that such fears of a one-sided approach were misplaced. He made sure that NED supported struggles for democracy everywhere—in Chile, South Africa, the Philippines, and South Korea, but also in Nicaragua, Cuba, Poland, the Soviet Union, and China. NED demonstrated that it would assist opponents of both right-wing and left-wing dictators, as well as a range of democrats in countries that were in transition or were working to consolidate a democratic system. RTWT