Democracy advocates are not only fighting their own country’s authoritarian regimes, but confront affluent autocratic alliances that act more like a business agglomeration – Autocracy, Inc. – than nation states, according to Pulitzer Prize-winning historian Anne Applebaum.

Opposition movements in states like Venezuela “are fighting against people who control state companies…who can buy sophisticated surveillance technology and who have inured themselves to the feelings and opinions” of their own citizens, she said last night, delivering the 19th annual Seymour Martin Lipset Lecture on Democracy in the World (above), sponsored by the Embassy of Canada and the National Endowment for Democracy (NED).

“There is no natural liberal order,” but there are considerable forces and resources that can be mobilized in its defense. The faults and “historical scars” of democracy are all the more reason to defend them, said Applebaum (right). By “blending liberalism and muscular patriotism,” Ukrainians have “demonstrated that it is possible to be a patriot and a believer in an open society, that a democracy can be stronger and fiercer than its opponents.”

It may be no more than a “vibe,” but she shared Russian opposition activist Garry Kasparov’s conviction that Ukraine’s resistance has inspired protests from Iran to China.

With the revenues generated by the sale of fossil fuels, autocrats in Iran, Russia, and Venezuela can buy and exchange repressive technologies, she observed, while China’s economic resources are translated into political sharp power in institutions like the United Nations and in such states as Turkey which now “echoes Chinese propaganda,” having dropped any pretense of concern over Uyghur human rights in exchange for lucrative investments from Beijing. 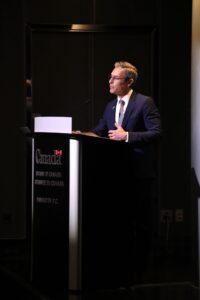 Unlike during the Cold War, today’s autocrats are indifferent to their international image or reputation, showing a contempt that fuels what democracy activist Srdja Popovic calls the “Maduro model” of governance. Autocrats who adopt it are “willing to pay the price of becoming a totally failed country, to see their country enter the category of failed states,” gladly accepting economic collapse, isolation, and mass poverty in order to stay in power. Assad has applied the Maduro model in Syria and Lukashenko is prepared to do so in Belarus.

The West’s fossil-fuels dependency also empowers authoritarians,  as “every dollar spent on Russian oil helps fund the artillery that fires on Ukrainian civilians,” she said, stressing the opportunity for fresh alliances between climate-change activists and democracy advocates.

Democratic activists should respond in kind by forging cross-border coalitions to act as conduits for the exchange of good practice on training and advocacy, sharing information and joint lists of legislative proposals for curbing autocratic influence. Networks like the World Movement for Democracy and the Oslo Freedom Forum help to “break the silos,” but we need “more and better” coalitions, she said.

Such mutual learning and collaboration is all the more imperative as the defense of freedom and democracy is the cause of our day, said NED President Damon Wilson (above), introducing the lecture. 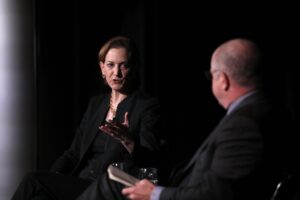 Perhaps autocrats are more collaborative because they recognize their vulnerability and appreciate that the demand for freedom will never expire, Applebaum told Journal of Democracy editor Will Dobson (right). They are also inherently flawed by the lack of internal pluralism and dialog which, in the absence of countervailing or contrary opinions, makes them victims of their own propaganda and ideology.

But the democracies also need to reassess “how we speak to the world” and rethink the media/information business model, she added, blaming “post-Cold War inertia” for the failure to defend and advance liberal democratic ideas.

Nevertheless, Applebaum remained an optimist, not least “because pessimism Is irresponsible and it’s the optimists who will change and fix things.”

.@anneapplebaum delivering the 2022 Lipset Lecture on Democracy in the World on “Autocracy, Inc” how the world’s authoritarian work together pic.twitter.com/xpiTlp8wuU