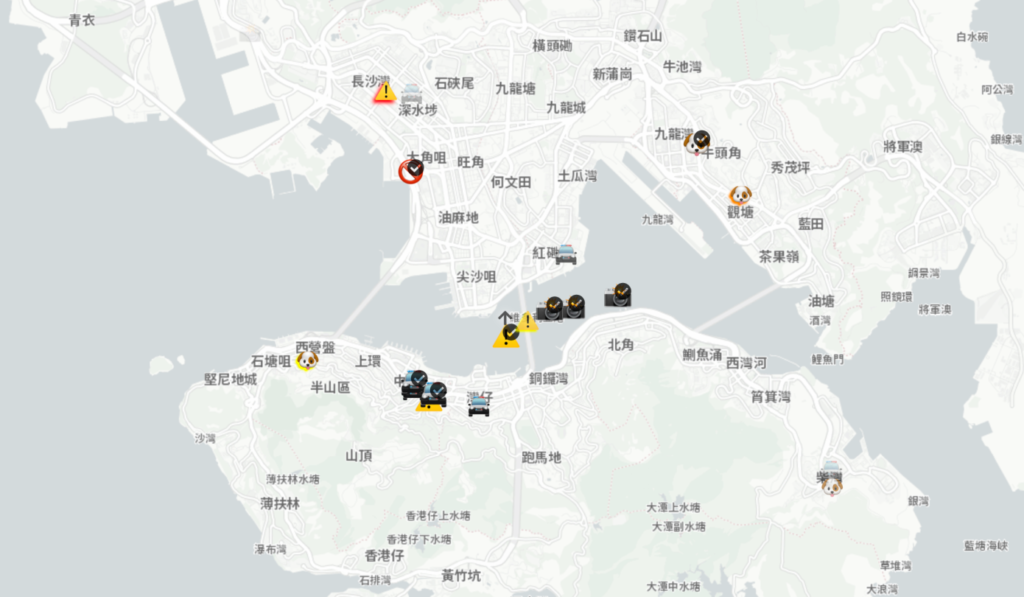 The true nature of China’s sharp power was on display this week after Daryl Morey, general manager of the Houston Rockets basketball team, posted a somewhat anodyne message of solidarity in support of Hong Kong’s pro-democracy protesters that unleashed a fire hose of acrimony from Beijing, the Washington Post reports.

“These dynamics have gone on for a long time,” tweeted Paul Mozur, China tech correspondent for the New York Times. “The Hong Kong protests are causing China’s underbelly of speech control to go mainstream in a huge way. The more Beijing pushes for control, the more the global narrative will slip away from it, and it won’t be pretty.”

Apple’s decision to greenlight an app called HKmaps, (above), which is being used by pro-democracy protestors in Hong Kong to crowdsource information about street closures and police presence, is attracting the ire of the Chinese government, TechCrunch adds.

An article in Chinese state mouthpiece, China Daily, attacks the iPhone maker for reversing an earlier decision not to allow the app to be listed on the iOS App Store — claiming the app is “allowing the rioters in Hong Kong to go on violent acts” (via The Guardian).

“Obviously corporations and others perceive that their business interests are at risk, so they are apologizing,” said Shanthi Kalathil, the senior director of the International Forum for Democratic Studies at the National Endowment for Democracy. “But where I would perceive the risks is at the level of reputation. These are well-respected global brands and there is reputational cost to simply going along with the party line.”

The need to access China’s market is at odds with the imperative to uphold liberal norms, observers suggest.

“As China’s economic clout expands, its government and consumers are coercing international companies and punishing speech they deem critical, adding a growing element of unpredictability for foreign executives weighing the opportunities and risks of doing business in the country,” The Post’s Gerry Shih explained.

China “has been rising for more than 40 years, unaccompanied by effective public pressure for reform. It opted in to the liberal order without liberalizing,” former Bush administration official Kori Schake observed in an essay published last year. “Despite President Xi Jinping’s expansive statements about preserving the liberal order, China undercuts it politically, economically, and militarily.”

Recent Canada-China tensions have shined a much-needed spotlight on the challenges inherent in maintaining bilateral relations with an authoritarian regime in general, and the arbitrary nature of the behaviour of China’s Communist regime in particular. As China’s vitriolic and aggressive response to our arrest of Huawei executive Meng Wanzhou has clearly demonstrated, Xi Jinping’s China is not governed by the rule of law in any real or substantive way, As described in a recent MLI paper by Taiwan-based security analyst J. Michael Cole, China has pursued “sharp power” influence operations rely increasingly on unsavoury methods that use co-optation, bribery, incentivization, disinformation, censorship, and other means, the Macdonald-Laurier Institute adds:

Revelations of Chinese penetration in Australia, New Zealand, the Czech Republic and elsewhere have sparked an awakening that was long overdue. In many ways, Taiwan has been a testing ground for these kinds of “sharp power” influence activities. Importantly, Canada is not immune to such activities. The CCP has an ongoing campaign to embed agents of influence in Canadian business, politics, media and academia. Simply put, Beijing aims to turn Canadian public policy to China’s advantage, to acquire useful technology and intellectual property, and to be able to monitor and intimidate Chinese Canadians and others.

What are the dangers posed by China’s “sharp power” operations? How should our government confront China’s attempts to infiltrate and influence Canadian politics and society? What lessons can be learned from countries like Taiwan that are on the frontlines in dealing with such influence operations? To help answer these questions, MLI – in partnership with the Prospect Foundation in Taiwan – has assembled a panel event to discuss China’s influence operations. 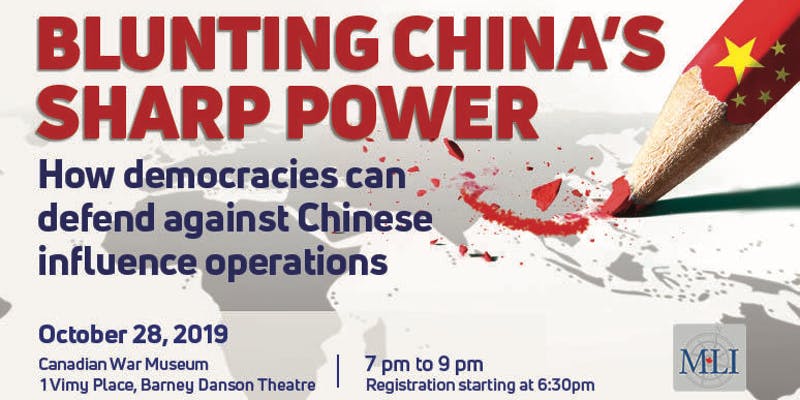