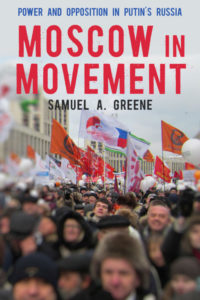 Russia has declared opposition leader Alexei Navalny’s Anti-Corruption Foundation a “foreign agent”. The move by the justice ministry means the organisation will now be subject to more checks by the authorities, the BBC reports:

It will also have to clearly state its “foreign agent” status on all official documents, and could be suspended. Mr Navalny, who has led nationwide protests against President Vladimir Putin’s rule, denied his foundation had received “foreign money”.

The violent suppression of recent protests in Russia could presage intensified repression of opposition activists, according to a new report from the International Institute for Strategic Studies.

The ‘non-systemic’ extra-parliamentary opposition has grown more organised and sophisticated and the Russian people more willing to demonstrate. Yet it would be unwise to overstate the opposition’s ability to mobilize mass protests or to understate the regime’s ability to respond to threats strategically, says the analysis of Russia’s opposition movements.

Even in the more repressive domestic environment post-2012, civil society activists continue to achieve notable success in reversing unpopular decisions and abuses on some issues, the report adds: 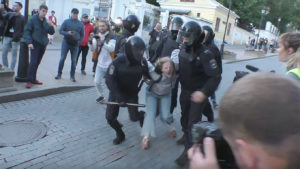 In May 2019, the mayor of Yekaterinburg cancelled plans to build a cathedral on a public park in the city centre following protests involving around 2,000 people. In mid-June, the Interior
Ministry closed a criminal case against Ivan Golunov, an investigative journalist, following a series of protests in Moscow and an unprecedented show of solidarity from Russia’s journalist community and even some dissenting noises from members of the elite. Interior Minister Vladimir Kolokotsev also dismissed two highranking police officers, including the head of the anti-narcotics directorate for Moscow, for fabricating evidence against Golunov.

“The dynamic is clearly not good for the Kremlin, which is stuck in an old logic as if everything was like before, incapable of bringing a vision and new ideas to people”, said Tatiana Stanovaya, founder of the R Politik political consultancy.  “Russian society is changing, people are disoriented and frustrated, and want change too.”

“There is definitely new hope for the opposition which has come up with a new mechanism to defeat the Kremlin, the trend is on their side… But there is also a strong desire for new political forces in Russia,” she added. “Even Navalny is nothing new and maybe it’s time for them to find new ideas and propositions out of the traditional ‘anticorruption’ rhetoric.”

The opposition still had work to do to convince people they are capable of influencing change, said Samuel Greene, Director of the Russia Institute at King’s College London, and author of Moscow in Movement (above).

“They need to show that electing somebody else would actually change something in people’s lives,” he said. “People still assume that it doesn’t really matter who’s in power. If you can begin to change that perception, then you might be able to change Russian politics.”

Should Putin’s support continue to decline, this could create opportunities for formal political competition to re-emerge, the IISS report suggests:

Russia’s political system relies heavily on Putin’s charismatic leadership. His popularity is an important political resource that maintains his position as the essential arbiter between rival factions and deters formal challenges from within the system. If the authority of the presidential administration declines further, it is possible that the ‘systemic’ opposition parties with parliamentary representation (the Communist Party, the Liberal Democratic Party and A Just Russia), could become less pliant and begin to offer more genuine opposition to the government. RTWT