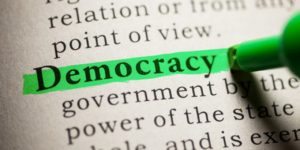 Social media and the Internet pose an acute threat to democracy, but probably not in the way that most people assume, says a leading expert.

Many people believe that the problem is a diffuse one based on excess disinformation and a decline in the ability of citizens to agree on facts, argues Stephen Stedman, a Senior Fellow at Stanford’s Freeman Spogli Institute for International Studies (FSI). But if we are talking about existential threats to democracy the problem is that digital technologies can be weaponized to undermine the integrity of elections, he adds.

Protecting Electoral Integrity in the Digital Age, the recent report of the Kofi Annan Commission on Elections and Democracy in the Digital Age, of which Stedman was director, said digital literacy programs would help build democratic resilience against weaponized disinformation, he notes: 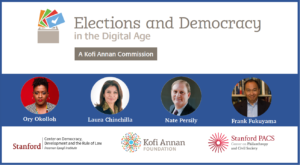 When it comes to the impact of authoritarian sharp power on the future of democracy, perhaps no other domain is as pivotal as that of technology, according to the National Endowment for Democracy’s Christopher Walker, Shanthi Kalathil and Jessica Ludwig. Technological interdependence has enabled modernizing authoritarians to reach across borders to censor and manipulate public discourse, sharpen polarization, and undermine democracy, they write for The Journal of Democracy:

From “safe-city” surveillance projects to state-linked disinformation campaigns on social-media platforms, authoritarians’ technological footprint can be seen around the world. Authoritarian regimes are also working to shape the international standards and norms that will govern the next generation of technology. Mounting an effective response will require a long-term, purposeful strategy rooted in civil society as well as in state institutions.

Germany may offer lessons for resilience in the face of Russian influence operations (or what Thomas Rid’s new book calls Active Measures), argues Jeffrey Mankoff, a senior fellow with the Russia and Eurasia Program at the Center for Strategic and International Studies (CSIS):

The dominance of mainstream media outlets, especially the state-run television networks ARD and ZTF, seems especially important. Close to one-third of Germans watch ARD’s evening news program Tagesschau. Most of Germany’s 16 states also have their own state-run television and radio networks. With a less fragmented and more centrist-dominated media environment, Germany is a harder target for Russian (and other) disinformation campaigns—with the important exception of groups like Russian-Germans and Turkish Gastarbeiter who get their news from non-German language sources. RT and Sputnik appear to have shelved plans to turn Berlin into a hub for their European operations in part because of the difficulty they faced gaining traction within Germany.