A Chinese citizen journalist serving a four-year sentence after reporting on the early stage of the COVID-19 pandemic in the city of Wuhan is in ill health after staging a long-running hunger strike, according to a lawyer who spoke with her family, AP reports:

Zhang Zhan was hospitalized on July 31 and now weighs less than 40 kilograms (90 pounds), according to a message sent by Zhang Zhan’s mother to a group on Chinese social media. Authorities notified the family that she was in poor health and told them to come to the prison, said Peng Yonghe, a lawyer who spoke with Zhang’s mother about the visit.

The Network of Chinese Human Rights Defenders (CHRD) is expressing concern about the deteriorating health and ongoing arbitrary detention of the freelance journalist who has been detained since May 2020 as a reprisal for her coverage of the Covid-19 pandemic, notes the Observatory for the Protection of Human Rights Defenders, a partnership of the World Organisation Against Torture (OMCT) and FIDH:

Between July 31 and August 11, 2021, Zhang Zhan was hospitalised in a prison hospital due to her deteriorating health as a result of an ongoing hunger strike she started in June 2020 to protest her arbitrary detention. …The Observatory recalls that on May 14, 2020, Zhang Zhan went missing in Wuhan, Hubei Province, one day after releasing a video that criticised the government’s measures to contain the virus, claiming the authorities were being negligent. …..  After seven months of pre-trial detention, on December 28, 2020, the Shanghai Pudong People’s Court found Zhang Zhan guilty of “picking quarrels and provoking trouble” (Article 293 of China’s Criminal Law) and sentenced her to four years in prison. 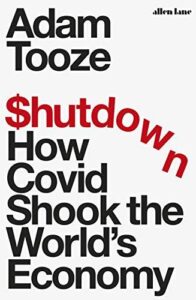 The ruling Communist party was especially sensitive to accurate coverage of the COVID outbreak because it was “a total disaster for the regime,” according to Adam Tooze, author of Shutdown: How Covid Shook the World’s Economy.

“SARS, in 2003, was a savage shock to the legitimacy of the Communist Party in China…. The thing about 2020 is it’s infinitely worse than that. This was a complete disaster ….. far and away, the worst crisis the regime has suffered since the reform period in the 1980s,” he told VOX:

The regime had promised itself it had built a reporting chain that ran up through the provinces, which are the size of large European states. Managing this ensemble is a dizzying task. It’s like trying to run four Americas at once — so getting a true reporting chain out through the Chinese provinces is an incredibly difficult thing to do, and it failed. And then they had a huge problem on their hands, they screwed up, and they know it.

Zhang Zhan’s trial was “a fraud from start to finish like something out of Franz Kafka’s novel-parable, The Trial, writes Liao Yiwu, the celebrated Chinese writer, oral historian, and folk musician, (author of “The Corpse Walker: Real Life Stories: China from the Bottom Up”). 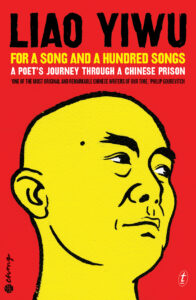 No matter what I write it does no good. This planet sees every single day an endless string of tragedies. So many tragedies! So many that people can’t see an individual tragedy, seemingly shrunken down to ant-size by comparison. That thinking ant is Zhang Zhan, writes Liao, one of China’s most persecuted writers, introducing the following essay, an appeal for international solidarity with the detained journalist.

On January 23, 2020, the eve of the Spring Festival military lock down  of Wuhan, central China’s largest city, because of the uncontrolled outbreak of the “Wuhan virus”, Zhang, without authorization,  entered the place where that contagion, as dangerous as the Chernobyl nuclear leak, had originated. She was one of the four citizen journalists who did so.

The first three citizen journalists were Chen Qiushi, Fang Bin, and Li Zehwa. Each was made to mysteriously vanish. It was rumored that  those three were “placed under residential surveillance at a designated place of residence according to the law”. But  Chinese law as in fact broken — China’s Criminal Procedure Law requires that the detainee’s family be notified within 24 hours.  This was not done. Zhang Zhan, the fourth, was detained on criminal charges. She was the most determined of them all.

Zhang Zhan first caught my attention when she went alone, without protective equipment, to investigate the alleged break-out point of the “Wuhan virus”  – the P4 laboratory at the Wuhan Institute of Virology, Chinese Academy of Sciences. She couldn’t get in so she circled around the perimeter wall of the P4 laboratory, explaining as she went along that she was not sure but this building may have been the source of  the “Wuhan virus”.  She was arrested soon thereafter.

In her own mind, she had done nothing wrong. She believed that searching for the truth is every citizen’s responsibility and duty.  Only by knowing the truth and unmasking lies can we come to a scientific understanding of the virus outbreak,  review our past mistakes, and prevent the further spread of the virus around the world. Without realizing it, she became, like the 2010 Nobel Peace Prize winner Liu Xiaobo who claimed to have “no enemies”,  the most dangerous enemy of the communist dictatorship.  No matter what your political stance, as long as you care about the truth and actually pursue it, you are the most dangerous enemy of the communist dictatorship.

That is why Zhang Zhan was arrested.  She paid a high price amidst the human catastrophe caused by the “Wuhan virus”.  Refusing to confess to any crime, she was abused and tortured during the seven-and-a-half months between her arrest and her trial. Her prolonged hunger strike left her unable to stand.  She was sentenced sitting in a wheelchair  with her hands tied behind her back. Her mouth was gagged, just as dozens of major Chinese cities in China had been gagged. Yet she persisted  —  her eloquent facial expressions and body movements testified that she would never give in.

The court sentenced Zhang Zhan to four years of imprisonment.  According to PRC law, she has the right to appeal her sentence.  Zhang Zhan however sees her trial as a fraud from start to finish like something out of Franz Kafka’s novel-parable, The Trial.  Therefore, she went on a hunger strike. Two months later she was sent to a reform through labor (laogai) prison enterprise in Shanghai where she continued her hunger strike. She became emaciated and her life hangs by a thread.  Many human rights organizations both inside and outside China have spoken out on her case. They fear that she will die in prison. 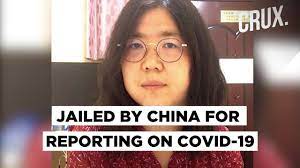 Threatening this cold-blooded regime with death can have no effect!  Zhang Zhan herself doesn’t care if her hunger strike works. What she does care about is that she does not bow her head in submission.  Now that all thoughts and actions expressing “civil disobedience” are considered criminal, she can only self-mutilate, hunger strike, and even die to express one’s natural human desire to pursue truth.

Nature — that is what people called it in ancient China. Westerners today call it “human nature”. Zhang Zhan’s bravery and persistence arose from basic human nature.  Are you,  out of cowardice or fear, turning a blind eye and a deaf ear to the “human nature” of Zhang Zhan?  If so, then consider this: you were born a human being.  Are you no better than a dog that wails and struggles to the end?

Italy’s most famous journalist, Oriana Fallaci, ends her monumental work A Man with these words: “For me the most beautiful monument to human dignity is still the one I saw on a hill in the Peloponnesus. It was not a statue, it was not a flag, but three letters that in Greek signify No: OXI. What is the point of suffering and dying? Why? For this is the only way to survive as a man or as a woman  — as a human being and not as a sheep. ”

Please stand with Zhang Zhan, this very gentle woman. She is the kind of person that Fallaci wrote about: the kind of person willing to pay with her life for her insistence that the truth about “the disaster caused by the Wuhan virus” is no less than important than the truth about the Chernobyl nuclear leak. As a poet and writer in exile for ten years, I want all my Western readers to understand that if the pursuit of truth and science is abandoned in favor of the commercial interests of globalization, then we have in our day made come true the words of the German philosopher Nietzsche : “God is dead!!! ”