The nature of great power competition in the 21st century will shape the world, some observers suggest. So should it be the strategic priority of foreign policy?

Given the current and projected policies of Beijing and Moscow, which aim at harming U.S. strategic interests, fragmenting our alliances, and fostering global and regional instabilities, it is imperative to devise appropriate U.S. responses to these challenges, argues Paula Dobriansky, Senior Fellow at the Harvard Kennedy School Belfer Center for Science and International Affairs and former Under Secretary of State for Global Affairs from 2001 to 2009. Accordingly, how to deal with these threats must be a central organizing principle of U.S. foreign policy, she writes for Foreign Affairs.

In the past couple of decades, the information environment has become one of the main battlegrounds of great-power competition, notes Doowan Lee, the senior director of research and strategy at Zignal Labs. In effect, major powers are using information warfare to sow domestic discord and distrust on their adversaries’ soil, rendering governments unable to focus on external threats, he writes for Foreign Policy.

The U.S. government has set up several programs, including the Defense Innovation Unit and National Security Innovation Network, under the Defense Innovation Board, to accelerate the use of emerging technologies that use artificial intelligence and data analytics, Lee adds. Yet these initiatives are still hamstrung by complex bureaucracy and protracted contracting processes that aim to acquire commercially available algorithmic solutions—an organizational issue widely shared across democracies. 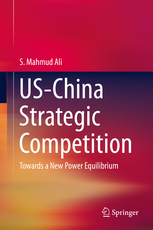 The challenge today derives not simply from the fact that the dictatorial regimes controlling China and Russia came to focus, years ago, upon competitive strategies designed to destabilize the long-established “operating system” of the international community, undermine our role and influence in it, and reorient that system in various ways increasingly around themselves, said Christopher Ashley Ford, U.S. Assistant Secretary of State for International Security and Nonproliferation.  The challenge also stems from the fact that while they turned to ambitious geopolitical competition in the post-Cold War era, we turned away.

China and Russia have integrated ideological, political, economic, military and technological tools while America’s “Arsenal of Democracy” has declined in part because, for 20 years, the U.S. has focused on countering terrorism, a real but not existential threat, and neglected investments necessary for great power competition, analyst Mir Sadat writes for The Hill. These investments impact our way of life because we are dependent on technology such as cyber, space, electronic warfare, artificial intelligence, machine learning and other emergent technologies — all part of the incipient Digital Age.

Several forces that have gained momentum and strength during the last decade are now converging as a formidable force that may reconfigure the post-pandemic international order, one analyst observes. There are three significant challenges to the foundations of the current liberal order, Qingming Huang writes for the Journal of Chinese Political Science:

(2) the exacerbation of nationalism enabled by nationalist and populist politicians; and

(3) the intensified competition among major powers.

China challenges the mythologized liberal international order and exposes the contradictions in the dominant Western model, while the pandemic has provided ample opportunities for China to extend its networks and promote its alternative hybrid political-economic model, Huang adds.

The balance of power has been shifting against the United States and other free and open societies, adds former National Security adviser H.R. McMaster. Much of that shift has been self-inflicted. Strategic narcissism has fueled both overoptimistic policies that underestimated the risks of action and pessimistic policies that underestimated the risks of inaction.

But even with strategic rivals, we should engage in both competition and cooperation when they advance national interests, argues Journal of Democracy contributor Alexander Cooley, Director of the Columbia University Harriman Institute.

What makes this contest particularly troubling for liberal democracies is that we enshrine debate—between those we elect and within the population at large—as a vital civic activity, adds Iain King, an adjunct scholar at the Modern War Institute and former director of programs at the Westminster Foundation for Democracy. So, when information warfare is fought over our own soil, steps that may bring success—like censorship—can also attack the very nature of the society we are trying to defend.

There is no doubt that the greatest long-term challenge facing U.S. foreign policy is China’s rise and the spread of its authoritarian model across the world, adds Alina Polyakova, President and CEO of the Center for European Policy Analysis (CEPA – a partner of the National Endowment for Democracy). In the medium term, Russia’s continued aggression and intent to undermine U.S. interests will only exacerbate the challenge to U.S. power.

Rebuilding the liberal democratic world for the twenty-first century should be the organizing principle, argues G. John Ikenberry, Professor of Politics and International Affairs at Princeton University. All other grand strategic challenges facing the United States—including rising illiberal great powers—will be made easier in such a world.