Nicaraguan president Daniel Ortega has intensified his crackdown on political opponents in advance of general elections on November 7. .. President Nayib Bukele of El Salvador has used his supermajority in the legislature to bend the justice system to his will. ……In Honduras, where elections are scheduled for November 28, President Juan Orlando Hernández – accused by US prosecutors of working with drug trafficking organisations – and his party have likewise been working to take over the justice system….Guatemalan president Alejandro Giammattei and his coalition, which controls Congress, are working to remove the last few independent judges and replace them with allies … 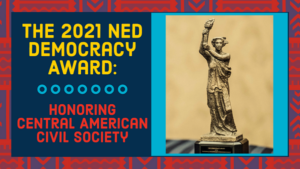 The US, EU and UK have taken some important steps to defend the rule of law in Central America, including freezing assets and suspending visas for individuals linked to abuses. But they can and should do more, Vivanco writes for the Financial Times:

They should put additional pressure on the Ortega regime and call on the UN Security Council to discuss the crackdown in Nicaragua. They should send a clear message that they will not be allies to governments that do not respect judicial independence, and that continuing attacks on the courts will carry consequences, including if necessary the suspension of military aid. RTWT

Across Central America, democracy and its institutions are under duress as authoritarians consolidate power and further destabilize and impoverish citizens, adds the National Endowment for Democracy, which recognized four leading civil society groups with its 2021 Award (above). From the co-opting of judiciaries to full-fledged attacks on political opposition and civic actors alike, proponents of democracy are increasingly worried about what the future holds for Central American democracy.