“From shuttering or co-opting the free press, to banishing political opponents, to eliminating free and fair elections and then repeatedly declaring himself the people’s choice, the Hun Sen regime continues to do everything in its power to destroy any hope of democracy in Cambodia,” said U.S. Congressman Alan Lowenthal.

In September, the U.S. House of Representatives passed the Cambodia Democracy Act of 2021, which “directs the President (Joe Biden) to impose sanctions on individuals responsible for acts to undermine democracy in Cambodia, including acts that constituted serious human rights violations,” Polygraph reports. 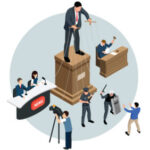 The news media are the canary in the coal mine when it comes to the sequencing of measures that autocrats typically use to cement power, media expert Kate Musgraves writes in Tipping Point: Democratic Erosion and the Assault on Press Freedom.

An analysis of media indicators in the Varieties of Democracy Institute’s global index illustrates a common pattern in countries experiencing democratic setbacks, with important implications for action. Time and again, would-be autocrats seek to methodically dismantle press freedom and independence as an early step towards consolidating power, Musgraves writes for the Center for International Media Assistance:

Press freedom advocates, including Reporters Without Borders, have been struck by the extent to which leaders in Poland have mimicked tactics pioneered by their counterparts in Hungary… One report by the Brookings Institution, The Anatomy of Illiberal States, described this as “illiberal sequencing,” in which “like-minded illiberal governments assess each other’s moves to consolidate control.” … 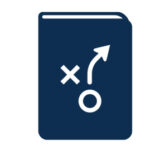 Observers have dubbed these shared tactics a dictator’s playbook or toolkit…. Many experts have honed in on digital authoritarianism, including using technology-driven methods to repress the space for free expression, such as surveillance and monitoring technology, national firewalls, and targeted content blocking.