As Chinese authorities struggle to contain the deadly Wuhan coronavirus, they are turning to a sophisticated authoritarian playbook honed over decades of crackdowns on dissidents and undesirables to enforce quarantines and lockdowns across the country, CNN reports.

For now, at least, the epidemic has brought into sharp relief the extent of Xi Jinping’s power, notes Council on Foreign Relations expert Elizabeth C. Economy. But the very existence of the crisis points to gaping contradictions and weaknesses at the heart of his regime. The longer Beijing takes to contain the virus, the wider and more consequential those cracks will become, she writes in Foreign Affairs.

Chen Guangcheng, the blind human rights lawyer who escaped from China (via the U.S. Embassy) in 2012, argues in The Washington Post that the coronavirus epidemic is proving Chinese authoritarianism dangerous not just domestically but also to the world. 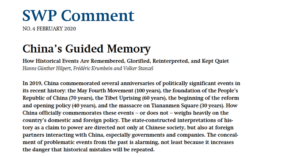 The Communist Party of China (CCP) does not limit itself to controlling China’s society in the present, but also extends its control to the history of the country, a new report notes. Among other things, by ideologising the memory of historical events, the CCP legiti­mises its rule. The latter thus appears to be the inevitable and consistently posi­tive result of a long histor, analysts Hanns Günther Hilpert, Frédéric Krumbein, and Volker Stanzel write in China’s Guided Memory: How Historical Events Are Remembered, Glorified, Reinterpreted, and Kept Quiet:

This ideologi­sation of one’s own history makes cooperation with China difficult, for China’s part­ners are also supposed to accept how historical facts are concealed, repressed, or reinter­preted – as a result, contemporary politics and society thus appear in a favourable light for the CCP. China’s leadership expects that the official view of history will at least be recognised – better still, explicitly con­firmed – as legitimate.

Historical narratives form the core of China’s national identity, but the CCP is systematically ignor­ing the struggles over democracy and human rights that have taken place in the course of its history, the authors add in the report for the Stiftung Wissenschaft und Politik (SWP – German Institute for International and Security Affairs).

Would employing a different strategy based on a different set of assumptions have produced better relations with China? analyst James Steinberg asks in the Texas National Security Review.

The Raoul Wallenberg Centre for Human Rights and its partners for the historic international launch of a landmark report on the status of Tibet under International law, the first-ever major publication on this topic. This event is cosponsored by the University of Ottawa’s Human Rights Research and Education Centre, the National Endowment for Democracy (NED), the Canada Tibet Committee, Montreal Institute for Genocide Studies, and the MacDonald Laurier Institute.

The launch will include a high-level panel discussion on “Tibet and International Law: Challenging China’s False Historical Narrative on Tibet” featuring the world’s leading international experts. Speakers include Professor Michael van Walt, international lawyer to the Dalai Lama and former Secretary General of the Organization of Nations and Peoples Not Represented; Dr. Lobsang Sangay, Prime Minister of Tibet in Exile; and Carl Gershman, President of the National Endowment for Democracy.