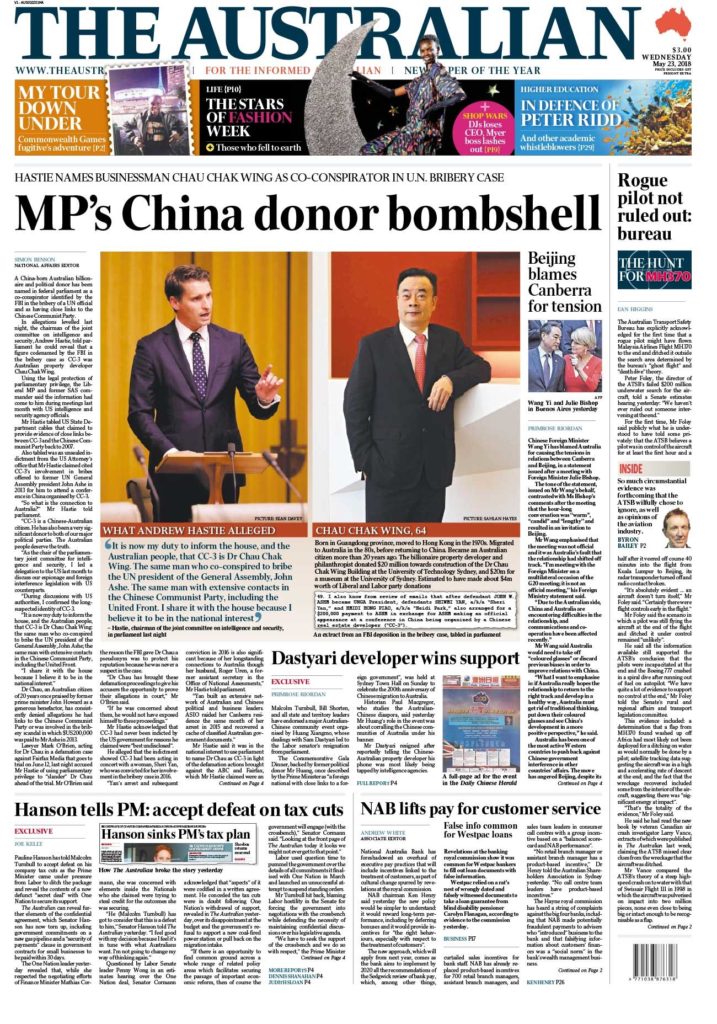 A Chinese-Australian real estate developer “co-conspired to bribe” a senior United Nations official, according to claims made in Federal Parliament:

Andrew Hastie, who chairs the powerful intelligence and security committee, used parliamentary privilege to claim businessman Chau Chak Wing funded the bribery of former president of the UN General Assembly John Ashe. In parliament on Tuesday night, Mr Hastie tabled a “sensitive” US State Department cable from 2007. He said Dr Chau had “close contact with the United Front, the influence arm of the Chinese Communist Party in 2007”.

“In Australia, it is clear that the Chinese Communist Party is working to covertly interfere with our media, our universities and also influence our political processes and public debates,” said Hastie, raising fresh concerns about what a National Endowment for Democracy report describes as China’s ‘sharp power’.

The U.S. House of Representatives’ Permanent Select Committee on Intelligence will begin a major inquiry into the threats posed by China, including Beijing’s significant influence operations against the United States, said committee aides. The inquiry on influence operations could go beyond China’s use of cultural language centers on American universities called Confucius Institutes and Chinese student associations.

Scholars and pundits in the West have become increasingly alarmed that China’s planned Belt and Road Initiative (B&R) could further shift the global strategic landscape in Beijing’s favor, with infrastructure lending as its primary lever for global influence, note analysts Bushra Bataineh, Michael Bennon, and National Endowment for Democracy board member Francis Fukuyama.

The planned network of infrastructure project—financed by China’s bilateral lenders, the China Development Bank (CDB) and the Export-Import Bank of China (CEXIM), along with the newly formed and multilateral Asian Infrastructure Investment Bank—is historically unprecedented in scope. But the truth is that the West long ago ceded leadership in this area to China, a phenomenon that was largely driven not by foreign policy but by domestic infrastructure policy, they write for Foreign Affairs:

While the growth in China’s policy bank lending was initially concentrated in other authoritarian states such as Venezuela or Ethiopia, today Chinese institutions also finance projects in democratic countries, such as the road network they are creating in the Balkans and eastern Europe. Beijing may seek to use infrastructure to gain foreign influence, but the impact of such diplomacy is often overstated—prospective loans are enticing for borrowers, but projects, once built, provide little ongoing leverage. While elites may be swayed in the short run, many Chinese projects deeply alienate local populations, leading eventually to backlash. This has already occurred in Argentina, Myanmar, and Sri Lanka, where deals concluded with authoritarian or populist leaders have helped discredit both those leaders and the Chinese.

“Western lending institutions should do more than simply wait for China’s lending programs to run their course. Multilateral infrastructure lending institutions must be restructured to account for the fact that they are no longer the only viable alternative for borrowers,” they contend. “The next iteration of Western development lending should promote transparent, competitive procurement and nonrecourse financing without hidden sovereign guarantees, but without imposing overly onerous requirements on host nations eager to move their projects forward.” RTWT