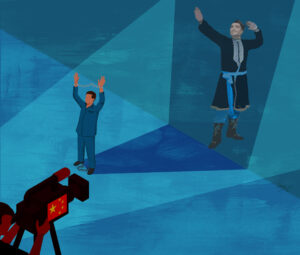 “The Happiest Muslims in
the World”? UHRP

China has employed high-tech surveillance tools and thousands of law enforcement officers to lock down the restive Xinjiang province in a bid to halt the largest outbreak of Covid-19 since Wuhan. More than 500 infections have been discovered since the middle of July in Xinjiang, the north-western region where the Chinese Communist party has interned more than 1m Uighurs, Kazakhs and other Muslims, The Financial Times reports:

The Uyghur Human Rights Project, a Washington-based advocacy group, wrote to the World Health Organization in February to express concern that the virus could spread rapidly in the overcrowded and unhygienic facilities. The group is now concerned that the government’s “wartime” measures could be used as an excuse to “lock people in their homes for weeks without prior warning”.

The U.S. has announced it will sanction the Xinjiang Production and Construction Corps (XPCC), a paramilitary organization operating in Xinjiang, where Chinese authorities, aided by the XPCC, are perpetrating a cultural and demographic genocide against ethnic minorities, Bethany Allen-Ebrahimian, writes for Axios China:

XPCC controls vast swaths of the economy in Xinjiang. Depending on how rigorously the sanctions are enforced, they could hobble the region’s economy and blunt China’s plans for further economic development of the region. The Trump administration also said it would sanction two Chinese Communist Party officials affiliated with the XPCC, according to a press release from the Department of Treasury. The sanctions fall under the Global Magnitsky Act, implemented in 2016 to make it easier for the U.S. government to sanction foreign government officials and entities complicit in human rights abuses.

The Xinjiang Production and Construction Corp was founded in 1954 as a group entwined with the People’s Liberation Army that would oversee the deployment of large numbers of ethnic Han citizens, many of them military veterans, to Xinjiang to build farms, factories and towns that would allow China to consolidate control of the important border region and the many ethnic minority groups there, The Times adds. As of 2009, the group, which reports directly to Beijing, had an annual output of goods and services of $7 billion, and the settlements and entities overseen by the bingtuan, or soldiers corps, included five cities, 180 farming communities and 1,000 companies. They also run their own courts, universities and media organizations.

Uyghur women both inside Xinjiang and around the world have accused the Chinese government of a campaign of abuse, including forced sterilization, cultural indoctrination and incidents of sexual violence, CNN reports:

It’s part of a wider pattern of human rights violations by the Chinese Communist Party in Xinjiang, where authorities are accused of detaining up to two million Muslim-majority Uyghurs and other minority ethnic groups inside vast, fortified centers as part of efforts to enforce greater control over the region. 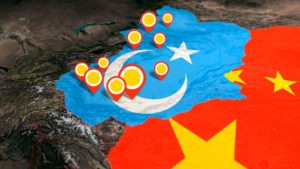 Rahima Mahmut, a Xinjiang exile and project director for the World Uyghur Congress in London, said women in Xinjiang are living in “hell.” “Just like any genocide, women are always the number one target … There is a very, very serious crime happening at such a large scale,” she said.

The NBA ran into myriad problems by opening one of its three training academies in Xinjiang, a police state in western China where more than a million Uighur Muslims are now held in barbed-wire camps. American coaches were frequently harassed and surveilled in Xinjiang, the sources said. One American coach was detained three times without cause; he and others were unable to obtain housing because of their status as foreigners, an ESPN investigation has found:

A former league employee compared the atmosphere when he worked in Xinjiang to “World War II Germany.” In an interview with ESPN about its findings, NBA deputy commissioner and chief operating officer Mark Tatum, who oversees international operations, said the NBA is “reevaluating” and “considering other opportunities” for the academy program, which operates out of sports facilities run by the Chinese government. Last week, the league acknowledged for the first time it had closed the Xinjiang academy, but, when pressed, Tatum declined to say whether human rights were a factor.

The NBA Prostitutes Itself for the Politburo, The National Review’s Cameron Hilditch writes. The breathtaking double-standard, the sheer hypocrisy of taking a “moral stand” against gender-specific restrooms but not against cultural genocide reveals that there was never any moral stand to begin with; there was only economic calculation. 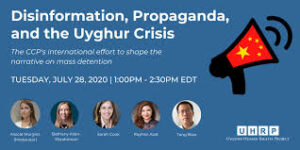 An overseas-based Uighur group urged the International Olympic Committee on Thursday to reconsider holding the 2022 Winter Olympics in Beijing because of what it says is China’s “genocide” of the Uighur population, AFP reports.

In an open letter to International Olympic Committee president Thomas Bach, the Munich-based World Uyghur Congress (WUC) accused China of “committing genocide, crimes against humanity and torture against the Uighur and other Turkic peoples” in Xinjiang.

“We have so far been greatly disappointed that the International Olympic Committee has not addressed the human rights situation in China since awarding Beijing the right to host the 2022 Winter Olympics,” said the letter, signed by WUC president Dolkun Isa.

In a report released this week, “The Happiest Muslims in the World”: Disinformation, Propaganda and the Uyghur Crisis, the Uyghur Human Rights Project – a partner of the National Endowment for Democracy (NED) – traces the evolution of the Chinese government’s attempts to promote a narrative – from secrecy and denial to whitewashing and justification – responding to international criticism of its large-scale arbitrary detention of Uyghurs and other Turkic peoples.