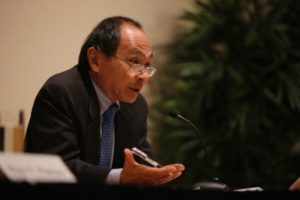 China’s model of authoritarian government could be an alternative to Western-style liberal democracy but only if Beijing manages to control social stresses and maintain economic stability, according to American political scientist Francis Fukuyama.

The Stanford University academic’s assessment was published on the website of the Asia Global Institute at the University of Hong Kong, the South China Morning Post reports:

Fukuyama explained … that it was unlikely that countries could fully recreate the Chinese model, especially its authoritarianism, as some aspects of Communist society could not be replicated. Those included “meritocracy, a disciplined party hierarchy, respect for education, and above all, a sense among the rulers that they have a certain responsibility to act in the public interest”, Fukuyama said, referring to measures the Communist Party has taken over the past six years under Xi.

But without the ability to keep strong leaders in check, China could never escape the “good emperor-bad emperor” scenario, he added.

“In a system with a strong state but no rule of law or democracy, a good emperor can move quickly to implement policies, more quickly than in a liberal democracy,” said Fukuyama, a board member of the National Endowment for Democracy, the Washington-based democracy assistance group.  “A bad emperor can do much more damage in such a system than in one with checks and balances.”

“The issue is whether the system is sustainable over the long run,” Fukuyama wrote. “There are a number of reasons for thinking that is not [the case], beginning with the challenges of dealing with the enormous social stresses that have appeared as a result of modernization.”

“But if China manages these stresses and remains strong and stable for another generation, then I think there is, in fact, a real alternative to liberal democracy.”

“Contrary to popular belief in the West, where democratic elections are typically regarded as essential to holding governments responsible for their policies, China’s approach supports accountability,” analysts Andrew Sheng and Xiao Geng contend. “Indeed, the evidence shows that policymaking is responsive to feedback from both the Chinese people and the international community, with leaders correcting mistakes and updating outdated measures as they gain new information,” they write for Project Syndicate.

“While many in the West sacrifice homo economicus to appease homo politicus, China’s leaders are trying to satisfy both,” they add. “They know that neglecting the needs of homo politicus could lead to social instability and fragmentation.”

But other observers argue that, paradoxically, China’s authoritarian resurgence is undermining regime legitimacy, as its reform era ending and generating fresh risks of instability. 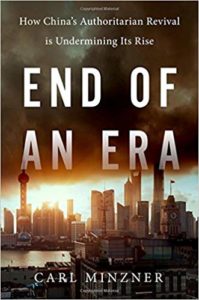 “The reform era post 1978, what people have come to think of as modern China, is ending,” according to Carl Minzner, author of “End of an Era: How China’s Authoritarian Revival is Undermining Its Rise.”

“The period of 30-40 years was marked by three factors: rapid economic growth, a certain degree of ideological openness to the outside world and relatively political stability where it seemed to be forming institutions. It is starting to come undone. The economy is slowing. Ideologically, China’s closing up,” he told the World Affairs Council of Albuquerque,

“Looking outward, there is an increasing nationalistic tone that the leadership is taking that has resonance among people in Chinese society that there could be clashes over strategic and economic areas,” said Minzner, a professor of law at Fordham University in New York.

“We haven’t seen anything like that since 1978,” he said, referring the “re-education” camps for Uighurs in Xinjiang “This is an extreme repression measure being taken that really looks like the resuscitation of practices we thought were dead and buried.”