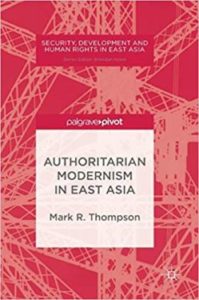 Over the past decade, democracy has regressed in much of Asia, though there are notable exceptions including Malaysia and Taiwan. Southeast Asia has witnessed a reversal in Thailand, weakening institutions and norms in Bangladesh, India, and the Philippines, backsliding in Cambodia and even to some extent Indonesia, and sustained authoritarian rule in Laos and Vietnam, among other examples, notes Council on Foreign Relations analyst Joshua Kurlantzick.

More disturbingly, China could clearly challenge the notion that modernism must necessarily, eventually, lead to political liberalization, according to a concise but well-argued new book, China could indeed further modernize without democratizing, Mark Thompson, Director of the Southeast Asia Research Center at the City University of Hong Kong, argues in Authoritarian Modernism in East Asia.

In 2017, the Cambodian Foreign Ministry expelled the National Democratic Institute (NDI – a partner of the National Endowment for Democracy) on the grounds that it  was not registered with the government; closed 32 radio frequencies affecting stations relaying Voice of America, Radio Free Asia and Voice of Democracy; and ordered the independent English-language newspaper Cambodia Daily to shut down, ostensibly for failing to pay taxes. In November 2017 the Supreme Court of Cambodia, at the government’s behest, dissolved the Cambodia National Rescue Party (CNRP), the country’s principal opposition party. As a result, the ruling Cambodian People’s Party (CPP) ran virtually unopposed in the 2018 National Assembly election. In November 2018 the government ended the work of the Khmer Rouge Tribunal, charged with prosecuting former Khmer Rouge officials for crimes against humanity and war crimes.

Youk Chhang (right), Executive Director of the Documentation Center of Cambodia (DC-CAM), a former NED grantee, received the Center for Justice and Accountability’s 2017 Judith Lee Stronach Human Rights Award. Chhang was honored for the extraordinary work that he and DC-CAM did collecting hundreds of thousands of pages of documentation of crimes against humanity committed by the murderous Khmer Rouge regime.

Please join the Tom Lantos Human Rights Commission and the Congressional Cambodia Caucus for a hearing on human rights, including labor rights, in Cambodia.  Witnesses will examine the multiple, interacting dimensions of the deteriorating human rights situation in Cambodia and offer recommendations for congressional action. 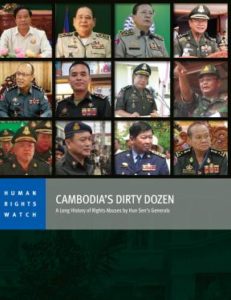 Labor and Human Rights in Cambodia

This hearing will be open to Members of Congress, congressional staff, the interested public, and the media. The hearing will be livestreamed via the Commission website and will also be available for viewing on the House Digital Channel service. For any questions, please contact Kimberly Stanton at 202-225-3599 (for Co-Chair McGovern) or Piero Tozzi at 202-225-3765 (for Co-Chair Smith).