The birthplace of the “Arab Spring”, Tunisia is the only country to achieve a peaceful transition to democracy following the 2011 popular revolts that swept autocrats from power across North Africa and the Middle East. But as the time comes to choose a successor to the first democratically elected president, Beji Caid Essebsi, who died in office at 92 in July, many voters are in a dark mood, frustrated by the government’s failure to improve the quality of life, Reuters reports:

There is still pride in democracy, and the country’s first televised presidential debates, spread over three successive nights this past week, were widely watched. But turnout in elections for local government last year was only 34% and came on the heels of widespread protests over living standards. Politicians have warned that a failure to show real progress could jeopardize the democratic project itself. 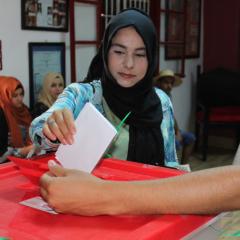 To the contrary, democracy is not risk, argues Patricia Karam, The International Republican Institute‘s Regional Director for the Middle East and North Africa. We should not forget that the discontent that sparked the Arab Spring was not only about liberty, but also economic dignity, she writes for Democracy Speaks:

Today, politics may have advanced, but the economy has not. Some may argue that continued economic stagnation and corruption are threatening the resilience of Tunisian democracy. However, if the Tunisian experience has shown us anything, it is the zealous commitment of its political leadership, despite ideological and policy disagreements, to a “Tunisia first” democratic course.

“In a region where democratic behavior is in short supply, Tunisia has an outsized impact on the region,” said Dr. Twining. “Tunisia’s example can be a source of inspiration if their democratic institutions remain resilient and lay the foundation for a more stable and prosperous country.”

The International Crisis Group think tank is warning against a “general crisis of confidence in the political elite” in Tunisia, AFP reports. “Divisions within Tunisia’s political leadership are preventing the government from addressing the country’s political and socio-economic challenges,” it said.

Comprising 60 percent of the overall population, young people account for a significant and diverse voter bloc, but recent trends suggest young people will be underrepresented at the ballot box. Fewer than 20 percent of people aged 18 – 35 voted in the 2014 parliamentary elections and in 2017, 69 percent of young people said that they did not trust political parties, Al Jazeera adds.

“We will see lower youth turnout than for older people [as in other years], but the difference is that this year the field is quite varied,” said Sarah Yerkes, a fellow at the Carnegie Endowment for International Peace. “It’s not just two old people, there are more options.”

The Norwegian Nobel Committee recognized the contribution of civil society in 2015 – including the UGTT labor movement – to the democratic transition when it cited (above) the Tunisian National Dialogue Quartet “for its decisive contribution to the building of a pluralistic democracy.”

“Tunisia’s progress on democratic reform since 2012, even as unrest hampers and distracts neighboring countries, demonstrates that the stakes are high, not just for Tunisia’s democracy, but for other countries wishing to forge their own democratic paths,” said NDI’s Campbell.

The mission will conduct its activities in accordance with the Declaration of Principles for International Election Observation and Code of Conduct for International Election Observers and will base its findings and recommendations on Tunisian laws and on international standards for democratic elections.  The delegation will maintain a Tunisia Election Portal during the mission with its latest observations and issue a preliminary statement of its findings at a press conference scheduled for Monday, September 16, 2019 at 3:00 p.m. CET at the Movenpick Hotel Du Lac Tunis.

The following is the full list of delegates participating in the IRI/NDI joint international Election Observation Mission: