In many parts of the world, China’s presence takes place through economic channels; Beijing has also become an exporter of political influence, however. Through some of its most vocal representatives, it increasingly presents itself as an alternative to the Western democratic model, leading numerous Western analysts to call China a “revisionist” power, notes a new analysis.

Beijing’s narrative has had an impact on a number of governments around the world—a majority of them classifiable as “illiberal”: Egypt, Ethiopia, Pakistan, the Philippines, Sudan, and Turkey, for example. What is newer and perhaps unprecedented is China’s growing influence in European countries, such as Cyprus, the Czech Republic, Greece, Hungary, Macedonia, Montenegro, Poland, Portugal, and Serbia, to name just a few, writes Philippe Le Corre, a nonresident senior fellow in the Europe and Asia Programs at the Carnegie Endowment for International Peace. 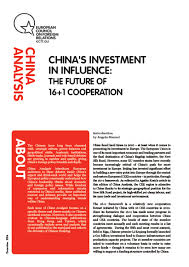 Unlike Russia, which has notoriously been interfering in the democratic systems of several countries (most notably the United States and Germany), China’s influence is more opaque and discreet,” he observes, citing “concerns—especially in Berlin—that China will use the Balkans as a new entry point into the European market and try to promote its own political model in countries with weaker governance as opposed to the EU model of liberal democracy.”

As for the EU, it should offer its South and East European member states new routes of economic development, the report concludes:

This offer should also include the preservation of European values, which the EU has been particularly successful in underlining over the past several decades. Faced with many challenges, including China’s rise within European borders, the EU should also invest in its own digital infrastructures and information technology, in addition to launching new initiatives to enhance the connectivity of the Eurasian region and create more jobs and growth in the key sectors of tomorrow.