Tibetans are “dying a slow death” under oppressive Chinese rule, says the head of the Tibetan government in exile. 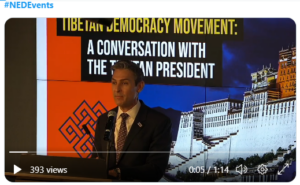 Sikyong Tsering wants China to lift a 12-year freeze on official dialogue with his Central Tibetan Administration, but forcing changes from Beijing will be a challenge given Beijing’s long-standing assault on Tibetan Buddhism, language and cultural traditions, he told POLITICO’s Phelim Kine.

“The policies adopted by [Chinese President] Xi Jinping today are aimed completely at the eradication of the Tibetan and other minority nationalities’ identities,” he added.

Russia’s aggression against Ukraine is reminiscent of China’s invasion of Tibet in 1950, the Sikyong told a forum at the National Endowment for Democracy (NED).

“Unfortunately, the world community did not listen to us in the last 50-60 years,” he said. “The U.S. and the western world are also responsible for making China what it is today, but now the we feel reaction from the U.S. government is on the right track.” 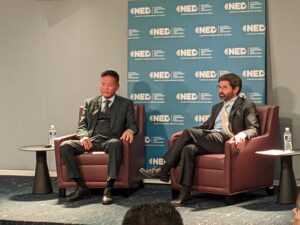 “Xi Jinping’s idea is to consolidate all power. This is reflected in the way Xi Jinping reacted to the pro-democracy movements in Hong Kong,” he said.

By contrast, the Tibetan community remains committed to democracy, despite the difficulties of democratic governance within an exiled diaspora.

“His Holiness the Dalai Lama introduced democracy in 1960 and we still thrive,” he noted. “We can be very proud that we have a diversity of voices in the House. Irrespective of different opinions, we are all committed to the same cause.”

Penpa Tsering joined the Endowment for his first in-person public talk in the U.S. since taking office to discuss his administration’s foreign policy vision, geopolitical developments in the region, and the implications for the Tibetan democracy movement.

“The Tibetan cause has consistently been associated with the values of justice, compassion, and nonviolence,” said NED President and CEO Damon Wilson (above). “But it also represents the principle of democracy.”

“Once in exile, he (H H Dalai Lama) immediately implemented significant democratic reforms. And today, Sikyong Tsering leads an administration that is a model of thriving democracy in exile,” a polity that “can serve as a model for other exile democracy movements,” he added.

As repression in Tibet intensifies, the urgency to resolve the Sino-Tibet conflict grows. With two Tibetan self-immolations reported just last month, the newly elected Sikyong of the Tibetan government-in-exile faces increasing pressure to find a solution to the six-decade-long conflict. In response, the Sikyong is recalibrating his administration’s China strategy.