China could overtake the United States in artificial intelligence technologies capable of disrupting every aspect of society, the leaders of a House panel said in a report released Tuesday.

Artificial intelligence “has the potential to disrupt every sector of society in both anticipated and unanticipated ways,” according to a report authored by Reps. Will Hurd of Texas and Robin Kelly of Illinois, the chairman and top Democrat of the House Oversight and Government Reform subcommittee on information technology. “In light of that potential for disruption, it’s critical that the federal government address the different challenges posed by AI, including its current and future applications.”

“The loss of American leadership in AI could also pose a risk to ensuring any potential use of AI in weapons systems by nation-states comports with international humanitarian laws,” they added. “In general, authoritarian regimes like Russia and China have not been focused on the ethical implications of AI in warfare, and will likely not have guidelines against more bellicose uses of AI, such as in autonomous weapons systems.”

“The DPA is a journalistic institution, and now, with Xinhua, it is involved with an organization whose aim is to promote the BRI and Chinese foreign policy,” Chinese media policy expert David Bandurski told DW.

Beijing is active in “improving the global perception of China’s political and economic system and positioning itself as a viable alternative to liberal democracy,” said Thorsten Benner, co-author of “Authoritarian Advance,” a report from the Mercator Institute for China Studies (MERICS) in Berlin and the Global Public Policy Institute (GPPI).

“It is irksome when Handelsblatt and the like allow their brand to be utilized for the propaganda of the Communist Party of China,” he said, adding that Germany’s media should not let their guard down.

“It is about arming oneself against increasing influence and, among other things, ensuring that German media companies do not fall into Chinese hands.”

A newly formed Hong Kong civil society group has appealed to the international community to help it fend off what it calls Beijing’s encroaching interference in the city’s freedoms, with three well-known activists advancing this cause at the European Parliament and in Britain this week, The South China Post’s Kimmy Chung reports:

Hong Kong Civil Hub, co-founded by the poster boy of the Occupy protests for greater democracy four years ago, Joshua Wong Chi-fung, issued a report on Thursday describing how “China’s sharp power” was affecting the rule of law, elections, the media, academic freedom and religion. It came a day before the city marked the four-year anniversary of the 79-day occupation of major roads in downtown Hong Kong where protesters called for universal suffrage.

The report draws on the influential “sharp power” report published by the National Endowment for Democracy.

Beijing had become more authoritarian and “redrawn red lines” after the Occupy movement, said Benny Tai Yiu-ting, a law lecturer at the University of Hong Kong.

Four years after tens of thousands of young people took to Hong Kong streets during the Occupy movement’s pro-democracy protests, the fierce calls for universal suffrage have all but died away. Instead, the focus of attention has shifted more recently to calls for Hong Kong independence – a cause supported by only a few, yet controversial enough to draw the ire of Beijing, The SCMP adds:

On Monday, it led to the government taking the unprecedented step of banning the small Hong Kong National Party on the grounds that its calls for independence threatened national security and public order. Many in the pro-democracy bloc appear to be still recovering from the failure of the Occupy protests to move Beijing, despite lasting 79 days and paralysing key areas in the city.

Younger people also feel a stronger sense of being Hongkongers today than four years ago. A survey by the University of Hong Kong found that in June this year, 70.9 per cent of those aged between 18 and 29 identified themselves as Hongkongers, 11.1 percentage points up from the end of 2014.

“We have exhausted practically every means to fight for democracy as we launched the civil disobedience movement in 2014,” said Occupy co-founder Dr Chan Kin-man, a sociologist at Chinese University. The pro-democracy camp needed to strengthen civil society, defend the further erosion of the city’s core values such as its freedoms and rule of law, and to actively participate in elections.

“Each election could be seen as a referendum and every victory could help sustain the spirit of the camp,” he said.

The US trade war with China may have helped leading dissident Liu Xia win her freedom. But some analysts contend that Beijing is the principal beneficiary of the administration’s abandonment of traditional US engagement with the rest of the world, The FT reports.

“The real winner is China,” said Richard Gowan, senior fellow at the UN University, the organisation’s Tokyo-based academic arm. “Everyone is getting on with the business of working out how to work around the US.”

“We’re seeing more and more Chinese officials being very active in the UN — becoming much more assertive and working though all the UN committees to start projecting China’s vision,” he added, highlighting Beijing’s success in enlisting UN support for its Belt and Road Initiative. 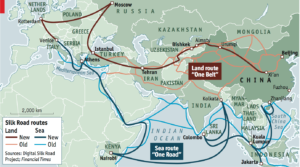 China’s Belt and Road Initiative turns five years old this week, CSIS notes, but the sharp power project is facing pushback in Malaysia, the Maldives, and other countries, observers suggest.

China seems to have counted on awing other states with the sheer size of Belt and Road, and to be betting that the antidemocratic wave now sweeping through Asia will reduce public questioning about how the funds are being used, notes Council on Foreign Relations analyst Joshua Kurlantzick. But on the occasions when public anger about the downsides of China’s plan has erupted, Beijing has appeared unsure about how to respond, still touting its construction diplomacy as a cure-all for diplomatic ties, he writes in China’s Risky Play For Global Power for the  Washington Monthly.