China’s political system was instrumental both in plunging the country into the COVID-19 crisis and aiding its recovery, but its pandemic management has not endeared it abroad, notes analyst Richard McGregor, author of The Party: The Secret World of China’s Communist Rulers (below). If Beijing had been open about its own early failings, instead of triumphantly promoting its later achievements, China’s global image might have been enhanced by the COVID-19 crisis. Outside China, however, for the most part, the opposite is the case, he writes for the Lowy Institute:

China under the control of the CCP is involved in a gigantic and novel social and political experiment enrolling one-sixth of humanity, a historic project that dwarfs that of democratic capitalism in the North Atlantic, argues Adam Tooze, a Professor at Columbia University and Director of the European Institute.

But to acknowledge that there are real ideological stakes is not automatically to accept that the US and its allies should gird themselves for ‘victorious’ confrontation with the communist foe, he writes for the London Review of Books:

America faces a powerful and assertive China, a one-party state with an official ideology it calls 21st-century Marxism, which is busy building a powerful military on the back of an economy set to become the world’s biggest in the foreseeable future. This development has shaken the assumptions that have underpinned economic and national security decision-making in Washington for the last thirty years. ….

Having recognised what ought to have been obvious all along – that China’s regime is serious about maintaining and expanding its power and conceives of itself as having a world historic mission to rival anything in the history of the West – the question is how rapidly we can move to détente, meaning long-term co-existence with a regime radically different from our own, a long-term attitude of ‘live and let live,’ shorn of assumptions about eventual convergence and the inevitable historical triumph of the West’s economic, social and political system.

The Uyghur human rights crisis has been a major test of  the Chinese government’s ability to shape discourse and control information on a subject that seriously jeopardizes its reputation, the Uyghur Human Rights Project reports. In response to the emergence of evidence of its secret campaign of mass detention, the Chinese government has shifted the narrative on the camps, first from silence, to denial, to attempts to frame them as a tool in a legitimate counter-terrorist struggle. To launch a new report, The Happiest Muslims in the World: Disinformation, Propaganda and the Uyghur Crisis, UHRP has invited a panel of experts to discuss this timely issue and its implications for human rights worldwide. 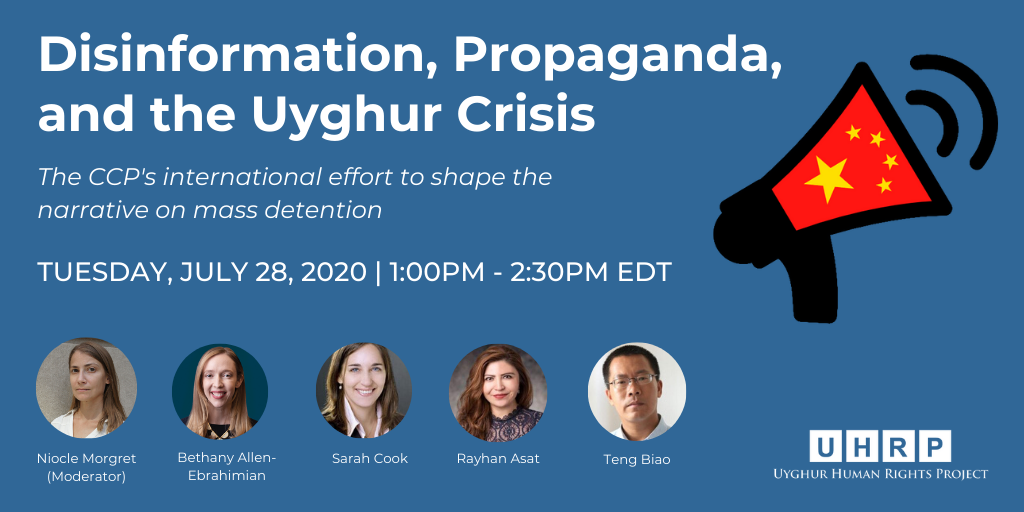 Disinformation, Propaganda, and the Uyghur Crisis

Speakers: Bethany Allen-Ebrahimian is the China reporter at Axios. Before joining Axios, Bethany served as the lead reporter for the International Consortium of Investigative Journalists’ China Cables project. Sarah Cook is Senior Research Analyst for China, Hong Kong, and Taiwan at Freedom House. Rayhan Asat is an attorney specializing in anti-corruption, internal investigations, and international dispute resolution.  Dr. Teng Biao, currently Grove Human Rights Scholar at Hunter College, is one of the earliest promoters of the Rights Defense Movement in China and the manifesto Charter 08, for which Dr. Liu Xiaobo was awarded the Nobel Peace Prize.  Register here.

The US may well find that it has become the junior partner or, at best, the leader of a coalition of smaller powers balancing the massive weight of China, claims Tooze, author of Crashed, a history of the global financial crisis, in a review of:

I’m looking forward to taking part in this event on July 28, at @fiu_sipa: “China’s Sharp Power: Beijing’s Growing Repression in Hong Kong, Xinjiang and Around the World” https://t.co/NfxD2y9KZ5 pic.twitter.com/B2eEHsAcgY