How do state actors with full-spectrum propaganda capabilities put them to use in modern-day information operations? a new report asks.

The Chinese Communist Party (CCP) has long prioritized disinformation to advance its domestic monopoly on power, claims to global leadership, and irredentist aspirations. It has built a sprawling infrastructure for manipulating information and disseminating its preferred narratives both at home and abroad through instruments such as print and broadcast media, people-to-people exchanges, and networks of groomed surrogates, notes a joint analysis from the Hoover Institution and the Stanford Internet Observatory. 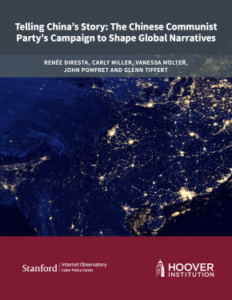 China’s potential to refine and increase its capabilities remains of significant concern to liberal democracies, according to Telling China’s Story: The Chinese Communist Party’s Campaign to Shape Global Narratives. We can expect it to learn, iterate, and adapt, availing itself of new avenues for coordinated information operations as they become available, say the authors, the Stanford Internet Observatory’s Renée DiResta, Carly Miller and Vanessa Molter, former Washington Post Beijing bureau chief John Pomfret, and Glenn Tiffert, PhD, Visiting Fellow at the Hoover Institution Project on Taiwan in the Indo-Pacific Region:

Tactics honed in the intensely contested domains of Taiwan, Hong Kong, and the coronavirus are likely to be applied to other issues and regions of the world, where they may encounter less resistance and meet with greater success. Keeping abreast of this landscape is a critical step toward understanding it and ensuring our ability to detect and mitigate state-sponsored information operations as they continue to evolve.

The authors describe China’s deployment of a full spectrum of technologically enabled propaganda: overt, attributable state media; grey content farms; and covert social media persona accounts—a modern-day variant of the agent-of-influence strategies of decades past in a series of case studies:

In 2007, the CCP unveiled a Grand External Propaganda Campaign, earmarking billions in an attempt to control external narratives about China, and Xi Jinping has vastly intensified that effort, waging a global “discourse war,” the report notes. China has an expansive attributed global propaganda apparatus, with a budget exceeding $10 billion, developed over half a century and fully integrated into the political and organizational frameworks of government, the authors add, citing Anne-Marie Brady’s article, “Authoritarianism Goes Global (II): China’s Foreign Propaganda Machine,” in the NED’s Journal of Democracy (26, no. 4 (2015): 51–59).

There is some evidence that China is beginning to try some of the more adversarial messaging tactics that directly attack its rivals; the litany of narratives about COVID-19 and the social media sarcasm inherent in “Wolf Warrior diplomacy” (discussed in the case studies above) offers a glimpse of what this approach might look like from China, the authors suggest. RTWT

Senator Bob Menendez (D-N.J.), Ranking Member of the Senate Foreign Relations Committee, this week published a new report by the Senate FRC Democratic Staff on China’s digital authoritarianism (discussed above). The report serves as the culmination of a comprehensive Committee investigation into China’s efforts to develop, export, and institutionalize a new, authoritarian governance model for the digital domain.