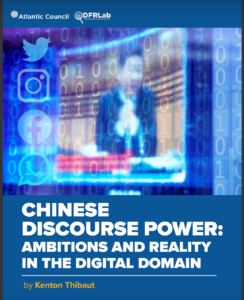 It is a misconception that China’s leaders aim to export authoritarianism: it is less interested in regime type than in gaining buy-in for its interests, according to a new analysis.

They believe that Western countries, and especially the United States, have been able to exert global dominance because they possess what China terms “discourse power” (话语权): a type of narrative agenda-setting ability focused on reshaping global governance, values, and norms to legitimize and facilitate the expression of state power, the Atlantic Council’s Kenton Thibaut asserts.

For the ruling Communist Party, gaining discourse power translates into an ability to increase China’s geopolitical power by creating consensus around an alternative, China-led international order—one that privileges state sovereignty over civil liberties, and that subordinates human rights to state security, she writes in a new report, Chinese discourse power: Ambitions and reality in the digital domain:

In its external propaganda messaging, China often targets audiences with narratives that erode the legitimacy of the liberal democratic framework and that resonate with local experience; for example, in the Global South, Chinese messaging on digital cooperation emphasizes a shared distrust of Western governments or a shared experience as “developing” (to use China’s term) countries….. 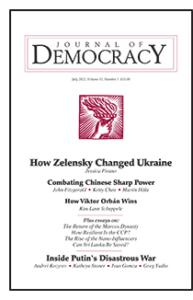 In the latest issue of the Journal of Democracy, Samuel C. Woolley describes how “nano-influencers” are reshaping social-media propaganda campaigns and upending political discourse in democracies around the world.

And a set of essays explores how societies in three world regions are “Combating Beijing’s Sharp Power”: John Fitzgerald details how civil society in Australia and Chinese Australians were the first to push back against Chinese interference in Australian politics and public life; Ketty Chen writes that Taiwan has long been the biggest target of Beijing’s information manipulation, and Taiwanese civil society has pioneered methods for defending against it; and Martin Hála explains how, despite Beijing’s strong-arm tactics, democracies in East Central Europe have blunted the impact of sharp-power manipulations by investigating and exposing them.