A bipartisan group of 12 senators has written a letter to senior Trump administration officials, urging them to craft a “comprehensive strategy” to counter covert Chinese interference in democracies around the world, The Daily Beast reports:

“While nations around the globe seek to influence public opinion and policy debates beyond their borders, the nature of Chinese efforts goes well beyond those legitimate activities,” the senators write, according to a copy of the letter obtained by The Daily Beast.

“The CCP’s long-term objectives with these operations are to undermine liberal democracies, erode the strength of U.S. alliances, weaken the ability of democracies to work against China, supplant U.S. leadership in the world and shape the future of the international order,” the lawmakers add. 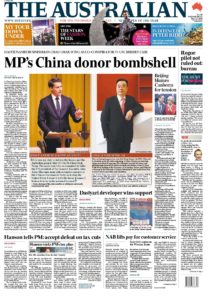 Many observers have been slow to recognize the ideological challenge authoritarian China poses to democratic governance because any discussion of ideology is often dismissed as “Cold War thinking,” and because for so many years the free-market democratic model appeared incontestably dominant. Yet China is contesting that dominance, through a two-pronged offensive that involves promoting authoritarian governance while also undermining democratic practices in countries near and far, notes Hal Brands, the Henry A. Kissinger Distinguished Professor at Johns Hopkins University’s School of Advanced International Studies.

Beijing’s sharp power – the subject of a recent National Endowment for Democracy report – is aimed at spreading a model of authoritarian mercantilism, he argues.

What makes the position of liberal ideology and democracy particularly perilous in our time is the combination of internal decay and external challenges, according to Minxin Pei (right) of Claremont McKenna College. The latter are chiefly posed by powerful authoritarian regimes, which are aggressively challenging the values of liberal ideology and the interests of liberal democracies, he writes for the Economist:

Of these regimes it is China, not Russia, that poses the most potent long-term threat to liberal ideology. Unlike Russia, a petro-state with a stagnant economy, China is poised to surpass the United States as the world’s largest economy in dollar terms if it can sustain moderately high growth in the coming decade (it is already the world’s largest economy in terms of purchasing power). As long as its ruling Communist Party continues to deliver robust economic performance while maintaining one-party rule, China’s threat to liberal ideology will be multi-dimensional.

China’s ideological assertiveness has been building for years, adds Brands, author of “American Grand Strategy in the Age of Trump:”

As a spate of recent reports makes clear, China is waging a concerted campaign to mute international criticism of its politics and policies, and to render countries from the Asia-Pacific to Europe more receptive to Chinese influence. Because democratic societies are naturally resistant to such efforts when undertaken by a brutal, authoritarian regime, Beijing is using an array of tactics to manipulate open debate in these countries….

In some ways, of course, these tactics are all part of the game of great-power politics. Yet more insidious in this case is that China is manipulating the open nature of democratic systems to distort public discourse, whether on human rights or Beijing’s behavior in the South China Sea. And when Beijing actively seeks to corrupt political actors or undermine the integrity of key social institutions, it crosses the line into political warfare against democratic systems.

China’s rise over the past four decades under what is perceived as a competent autocracy has already undermined the long-held notion that only liberal democracies are capable of producing not only freedom but also durable and superior economic performance, adds Pei, author of “China’s Crony Capitalism” and a contributor to the National Endowment for Democracy’s Journal of Democracy:

To be sure, the party’s record of rule since 1949 is decidedly a mixed one. … Nevertheless, to poorly informed outsiders, especially people frustrated with the deteriorating infrastructure, stagnant growth and destructive identity politics of advanced democracies, the allure of a one-party regime that can get things done is simply irresistible.