China’s Covid policy shift is undermining the regime’s social compact and the legitimacy of the ruling Communist Party, experts suggest.

“The zero-Covid policy has impacted the poor more than the rich. It exacerbates the Dickensian divide between the haves and have-nots in China,” says the Brookings Institution’s Diana Fu. “When young people can’t find jobs, small business owners go bankrupt, migrant workers are evicted, and infected children are separated from their families, it makes people question whether the government is holding up its end of the bargain,” she tells the Financial Times. 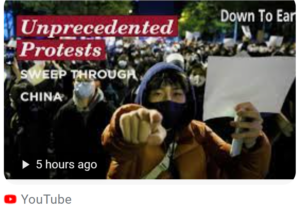 Fu says that the legacy of the protests will go far beyond the zero-Covid policy reversal. The period marks, she says, a turning point for a generation who have no memory or knowledge of the 1989 Tiananmen democracy movement: “China’s Václav Havel moment”.

“Václav Havel had described people living under communist Czechoslovakia as greengrocers who put up signs supporting the regime’s policies, thus becoming a part of the system of oppression,” Fu says. “Prior to the protests, Chinese citizens had largely complied with the zero-Covid policy as citizens under any authoritarian system would. However, the protests showed that not all Chinese people are greengrocers; some are daring to dissent for the first time.”

The protests were a “furious reaction” to the regime’s imprisonment of “tens of millions, even hundreds of millions” of its own citizens, Stanford’s Larry Diamond tells VOA’s Laurel Bowman (above).

Local authorities’ immediate response to protests has been to use some concessions to make the political problem go away (and then later punish those who took to the streets), notes Mercatus Center analyst Weifeng Zhong, curator of the Wei To Think Again newsletter on U.S.-China competition. For example, National Endowment for Democracy (NED) partner China Digital Times recorded 31 environmental protests from 2005 to 2015. Over 40% of the time, the government responded by arbitrarily canceling a polluting project the residents complained about and pacifying them with compensations, he writes:

But in doing so, the Chinese government was bending or breaking existing rules and norms to solve its political problems, including, for example, undermining a company’s economic freedom in deciding where to open a factory. Consequently, as protests broke out more often, China slipped further behind in its economic freedom, as the figure below shows. Moreover, when the government uses piecemeal pacification to stamp out protests, it incentivizes more protests in the future because protestors see that taking to the streets works. RTWT 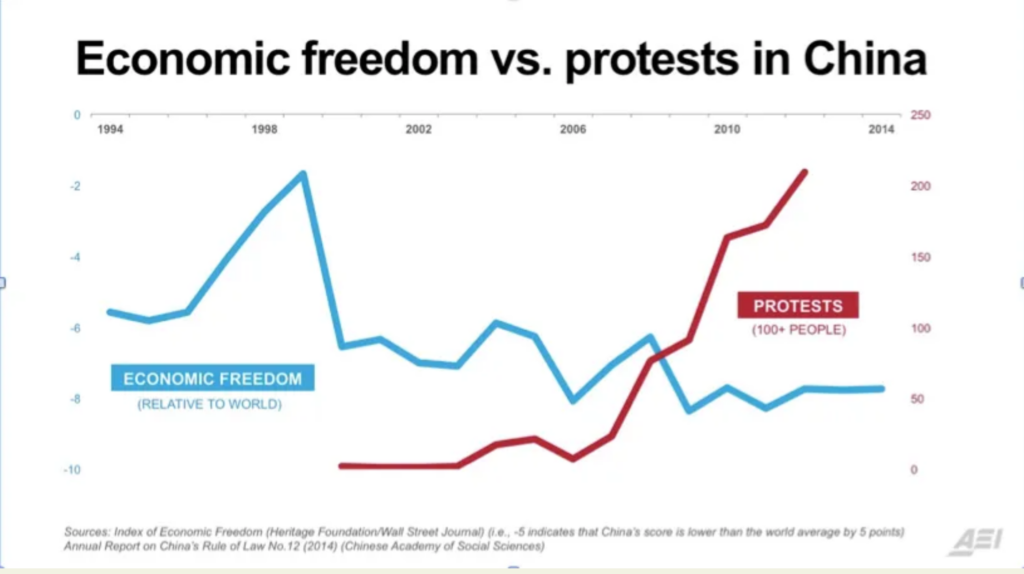