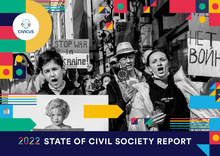 Democratic institutions and traditions are under increasing attack, but positive changes are still being won, says the 2022 CIVICUS State of Civil Society Report.

The military has gained power in multiple countries, including Burkina Faso and Sudan, while in several others, including El Salvador and Tunisia, elected presidents are removing democratic checks on power. Entirely fraudulent elections have been held in countries as different as Nicaragua and Turkmenistan. Autocratic nationalists have triumphed in elections in countries including Hungary and the Philippines, the report observes:

But at the same time there have been successful mobilizations to defend democracy, not least in the Czech Republic and Slovenia, where people voted out political leaders who fostered divisiveness in favor of fresh and broad-based alternatives. Progressive leaders promising to advance social justice have won power in countries such as Chile and Honduras. In many contexts, including Costa Rica and Peru, a prevailing sentiment of dissatisfaction is leading to a rejection of incumbency and willingness to embrace candidates who run as outsiders and promise disruption.