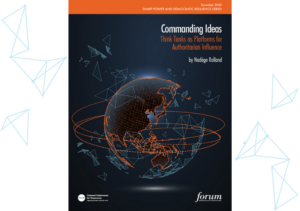 Think tanks first emerged out of a democratic political system that favors freedom of conscience and thought, according to a new analysis. They were designed to generate new ideas, provide objective research and analysis, and consider relevant policymaking questions without government direction. In recent years, however, authoritarians have rapidly grasped the potential value of think tanks as conduits for influence abroad, notes Nadège Rolland, a  senior fellow for political and security affairs at the National Bureau of Asian Research (NBR) and nonresident fellow at the Lowy Institute.

Unfortunately, some democratic think tanks may be tempted to engage with authoritarian partners because running research institutions is expensive, and funding sources for certain forms of expertise are scarce, she writes in Commanding Ideas: Think Tanks as Platforms for Authoritarian Influence, the latest Sharp Power and Democratic Resilience report from the National Endowment for Democracy’s International Forum for Democratic Studies:

Authoritarian think tanks operate much like their democratic counterparts—organizing public conferences and events, publishing research in academic journals and on their websites, and sharing analyses with media outlets. But the antiliberal and antidemocratic political systems to which these entities belong repress any form of dissent and claim control over the discursive and ideational space. The overall effect lends regime-backed narratives an artificial legitimacy. Democratic think tanks and other civil society stakeholders have a critical role to play in strengthening democratic resilience and countering authoritarian attempts to undermine intellectual freedom.

“Seeking to engineer a perception of global support for their political system and to shape a landscape that will be more favorable to their policies, talking points, and version of the truth, some authoritarian regimes—including those in Russia, China, and the Persian Gulf monarchies—have encouraged the creation of their own national think tanks,” Rolland asserts.

The report is not just about PRC think tanks but they get a lot of attention, adds Sinocism:

Xi Jinping’s rise to power in 2012–2013 marked in many domains an acceleration and clarification of previously observable trends. Think tanks are no exception. At a December 2012 CCP economic work conference, Xi proposed establishing high-quality think tanks to serve policymaking….. Fu Ying, a distinguished Chinese foreign policy practitioner, explained that Chinese think tanks should “adhere to the Party leadership and serve the country” while at the same time being “independent and objective.” In this case, “independence” does not mean free from government control, but rather free from the influence of Western concepts and ideas that the CCP considers threatening and subversive. More autonomous organizations, including the widely respected Unirule Institute of Economics, have since been forced to close down…