Members of Cuba’s San Isidro Movement – the group of artists, academics, and other alternative thinkers who garnered global attention by staging a rare protest outside the Ministry of Culture on 27 November – as well as independent journalists covering their story, are under frightening levels of surveillance and face arrest by police and state security officials if they leave their houses, which amounts to house arrest, said Amnesty International today.

“The disturbing level of restrictions to which activists and independent journalists are now being subjected is like something out of an Orwell novel set in Havana’s palm-lined streets. The police presence outside their homes, and constant threat of arrest, is so relentless that activists are essentially being imprisoned in their own homes,” said Erika Guevara-Rosas, Americas director at Amnesty International. 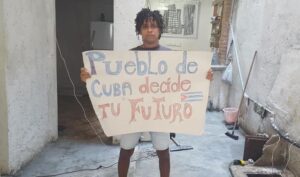 It’s important to understand the magnitude of what the movement – aka N27 – is attempting to accomplish, notes Amherst College professor and Journal of Democracy contributor Javier Corrales. They are challenging three of Cuba’s largest historical norms, he writes for America’s Quarterly:

“It shows how deep into the population the desire for change runs, and it shows how the world stands in solidarity with Cubans in their demand for freedom,” he told Local 10 News.

The Communist regime has launched a series of “egregious attacks” against its critics, said one democracy advocate. A Florida-based regime operative who recently returned from Cuba used a You Tube broadcast to warn a prominent activist that he was being surveilled and had “…a Mercader waiting for me” a reference to Ramon Mercader, the Spanish-born KGB assassin of Leon Trotsky.  ‘A Mercader’ is code in the Russian and Cuban intelligence services for international strikes at exiled enemies, the advocate said.

Compared with recent mass protests elsewhere in Latin America, Cuba can seem an island of stultifying calm. But a recent, social media-fed demonstration against the authorities by artists and dissidents shows that many Cubans also thirst for change, adds Michael Bustamente, an assistant professor of history at Florida International University.

The San Isidro Movement protest is unprecedented in two ways, he writes for the FT: its size (up to 500 people), and the fact it crossed generational and political lines. Moreover, the group was joined by well known cultural luminaries, even if they did not fully agree with the San Isidro movement and its anti-government message. What united them all was the demand that freedom of expression be respected, period.