Authoritarians are resurgent because of the failure to create a new global system of democratic values, said former Solidarnosc leader and Polish president Lech Walesa.

“Polish democracy in practical terms is below 50 percent [of what it could be],” Walesa told Foreign Policy. 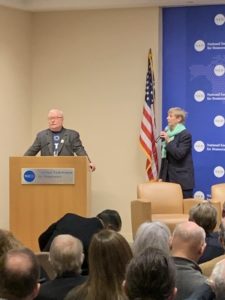 On November 15, 1989, Walesa became the second private foreign citizen ever to address a joint session of the U.S. Congress – preceded only by the Marquis de Lafayette. This week he reflected on democratic achievements and challenges at the National Endowment for Democracy (above).

“This is an era of discussion and debate,” Walesa said today. “But even democracy requires reform and redefinition.

“We underestimated democracy in Poland and allowed populists and demagogues to influence the election,” he added. “You have to do everything you can to prevent this. … If you underestimate democracy, you will be in trouble.”

The Berlin Wall fell “because Communism fell in Poland first,” a former US Ambassador to Poland told a Wednesday forum at the US Capitol.

“The Poles were first,” said Daniel Fried. “Poles were the first out of the box in 1989 and the Polish success triggered the Hungarian communists to quickly negotiate a surrender of power. That, in turn, helped trigger the Velvet Revolution and all of this brought an end of the Berlin Wall.” 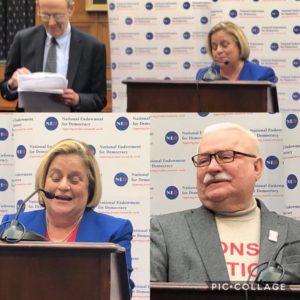 “Thx to @NEDemocracy for honoring Lech Walesa, leader of the Solidarity movement which restored #democracy in #Poland,” former Congresswoman and NED board member Ileana Ros-Lehtinen (left)  tweeted. “It is our duty to support those who fight for #freedom in #Cuba #Venezuela #Nicaragua.”

“@NDI very proud to join our democracy partners at the @NEDemocracy to celebrate the 30th anniversary of the 1989 democratic revolutions, with the venerable Polish leader of Solidarity, Lech Walesa,” NDI’s Robert Benjamin tweeted.

NDI Chairman Madeleine Albright told the group that young people are “the energy of democracy,” and called for young people everywhere to participate in their country’s democratic future.  “Democracy is not a spectator sport,” she reminded them.