The Wuhan Virus and the attendant misery that the Chinese communist state has unleashed upon the world (very much including its own people) has laid bare a core structural flaw in the assumptions underpinning globalization, notes Andrew A. Michta, the dean of the College of International and Security Studies at the George C. Marshall European Center for Security Studies.

It turns out that the radical interweaving of markets—which was supposed to lead to the “complex interdependence” that …would lead to an increase in global stability as countries’ fates are proven to be dependent on each other’s fortunes—has instead created an inherently fragile and teetering structure that is exacerbating uncertainty in a time of crisis, he writes for the American Interest:

The fundamental question is one of values: Is this kind of globalization compatible with liberty and democratic governance? My simple answer is no. By ignoring the role of nations in the international system—or, if not ignoring, indeed prophesying the nation’s demise—globalization’s boosters have implicitly, if perhaps unwittingly, lessened the accountability of elites and downgraded the voice of voters in these matters. No citizenry, if asked, would vote for the status quo—their working-class communities gutted, their security endangered, and their country made dependent on an adversarial foreign power.

This virus crisis is a wake-up call, and while some argue we are waking up too late to effectively counter current trends, my money is on the resilience of Western democratic institutions, Michta concludes. RTWT

Global lawsuits against China for “patent breaches” of the International Health Regulations over its handling of COVID-19 could run to at least £3.2 trillion from just the nations of the G7, according to a newly released report from the Henry Jackson Society.

The report claims that the Chinese government’s early handling of the disease and failure to adequately report information to the WHO breached the International Health Regulations [IHRs], a Treaty to which China is a signatory and legally obliged to uphold. These breaches allowed the outbreak to rapidly spread outside Wuhan, its place of origin, note analysts Matthew Henderson, Dr Alan Mendoza, Dr Andrew Foxall, James Rogers, and Sam Armstrong. Their research discloses that the Communist regime: 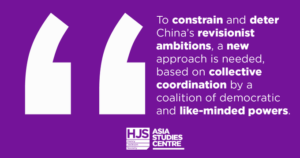 The coronavirus pandemic is generating all kinds of conspiracy theories, while Russia and China use disinformation to sow distrust and uncertainty, fear and divisions across Europe, Carnegie analyst Judy Dempsey observes.

The impact of the COVID-19 pandemic is exacerbating Latin America’s underlying institutional problems, notes IRI program officer Joseph Dickens. Some governments have suspended constitutional rights and freedoms, adopted broader surveillance mechanisms and contributed to misinformation. While these measures are worrying signs of democratic backsliding, the pandemic has also revealed the solidarity and resilience of ordinary citizens, he suggests.

Matthew Henderson of the Henry Jackson Society tells The Sun online (above) about the report claiming China owes Britain £351bn for breaking international treaties in relation to the country’s handling of COVID-19.