The European Union may need “broader rules to make sure that the way companies collect and use data doesn’t harm the fundamental values of our society,” tech czar Margrethe Vestager, said in a Friday speech. What’s she driving at? Think disinformation and the Cambridge Analytica scandal, Fortune reports:

The EU’s General Data Protection Regulation (GDPR) may protect people from companies misusing their personal data, she told a gathering of lawyers in Copenhagen, but the privacy law’s rules “don’t help me, if the problems come from the way that [companies] use other people’s data, to draw conclusions about me or to undermine democracy.”

“When platforms manipulate the way we see the world, in ways that we often don’t even notice, that affects our ability to understand the world around us. It can be hard for us to make good decisions, if we’re not confident of the facts. And that can stop our markets, and even our democracies, from working well,” Vestager warned. 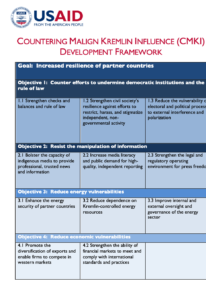 The effort, first announced in July, is aimed at countries such as Ukraine, Georgia and Moldova. An agency official, Assistant Administrator Brock Bierman, presented it Thursday to diplomats in Warsaw, delivering the message that Washington remains committed to democracy across a region that shook off Moscow’s control three decades ago. Bierman talked about what he called Russian President Vladimir Putin’s “soft power aggression.” He said the Kremlin interferes in elections, waging information warfare and promoting corruption.

“The fact that a U.S. government agency is undertaking efforts to tell the story that Americans are countering the Kremlin — and exactly on the territory the Kremlin would dispute, where Moscow would rather not have anyone else but themselves — it’s a powerful message and the right message,” said Wojciech Przybylski, the editor of Visegrad Insight magazine (a partner of the National Endowment for Democracy). 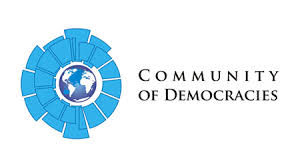 It was reassuring to hear of U.S. efforts to support democracy across Europe, he told The Associated Press. The initiative was launched at the Warsaw-based Community of Democracies, a global coalition of democratic states.

The U.S. government encourages a holistic approach to identifying, tracking, and countering disinformation, said Scott Busby, Deputy Assistant Secretary in the Bureau of Democracy, Human Rights and Labor at the U.S. Department of State. We are pushing back by raising awareness among vulnerable audiences, increasing societal resilience, and championing independent media, he told the Global Cooperation and Training Framework Workshop on “Defending Democracy through Media Literacy II.”

One way to boost our resilience and raise the cost for our adversaries is through education – an educated population with a high degree of media literacy is a harder, costlier target for anyone trying to fool it with disinformation, he added, applauding Taiwan’s introduction of a curriculum to enhance media literacy in the face of China’s aggressive influence operations. 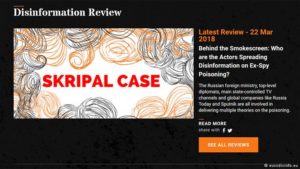 Moscow keeps assassinating (or trying to) opponents of Vladimir Putin ’s regime in Western Europe. The latest case, according to U.S. officials, is the murder in a Berlin park on Aug. 23 of a Georgian who fought against Russia in a Chechen uprising. So why does the West seem to want to let Mr. Putin get away with it? The Wall Street Journal asks:

The murder of Zelimkhan Khangoshvili, described as a midlevel commander during Chechnya’s second war with Moscow, follows the Kremlin’s attempt last year to poison former spy Sergei Skripal in Salisbury, England. That attack left Mr. Skripal and his daughter in the hospital, one innocent Briton dead, and another citizen and two police officers ill. The Kremlin also murdered Alexander Litvinenko in London in 2006.

Because many Americans are now highly concerned about how misinformation on social media can impact our democracy, scientists are calling for a new research agenda to fully understand the threat. But it isn’t only deliberate human wrongdoing that needs our attention; the structure of social media itself may be part of the problem, The Washington Post’s Robert Gebelhoff adds.

There is a social media battle currently being fought in Sudan over the fate of the country’s transition from strongman rule to a power-sharing arrangement between the military and the pro-democracy movement, The Soufan Center’s Cipher Brief reports:

The most ardent supporters of the Sudanese military retaining strong influence in politics are the governments of Egypt and the United Arab Emirates (UAE), which both have a vested interest in preventing a pro-democratic revolution from succeeding anywhere in the region. As reported in the New York Times, Egypt and the UAE used cyber mercenaries thinly veiled as front companies to wage an online disinformation campaign against the protesters. These self-styled cyber warriors sought to convey that the protesters represented a threat to the stability of Sudan and that only the military could protect the country and keep it from sliding into anarchy. 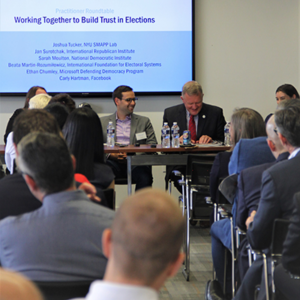 Across the world, democracy continues to be threatened by a constellation of new hostile forces intent on eroding the freedoms and values that are the fabric of democratic societies. Technology is weaponized, and social media platforms and the hardware and software of elections are battlefields in the fight to promote democracy, the International Foundation for Electoral Systems (IFES) observes:

As a prelude to the American Political Science Association’s (APSA) annual meeting, the Electoral Integrity Project held a pre-APSA workshop, “Securing Elections: Foreign Meddling, Fake News and Political Violence,” at the International Foundation for Electoral Systems (IFES) headquarters on Wednesday, August 28. IFES co-sponsored the event alongside the Massachusetts Institute of Technology Election Data and Science Lab, the Electoral Integrity Project, the Electoral Management Network and RC 23: Elections, Citizens and Parties. The daylong event brought together more than 120 scholars and practitioners from around the globe to consider how elections can be protected from the variety of security threats that emerge during the electoral cycle.

IFES has a vacancy for a Global New Media and Disinformation Specialist (RSVP: HT Global Jobs), based in Arlington, Virginia.