The slain Saudi journalist Jamal Khashoggi “has become the symbol of our collective moral conscience, the voice for the voiceless in the Middle East,” his fiancée Hatice Cengiz wrote in a  Time magazine op-ed on the one year anniversary of his murder.

“Jamal supported the fight for democracy in the Middle East after the Arab Spring,” she wrote. “ ‘It is time for concepts like freedom of thought and democracy to arrive in Arab states as well,’ he would say. It was statements like these that so provoked the current leaders of Saudi Arabia, afraid of their own shadows, their rage growing into such animosity that they carved up a human being because of his words.” 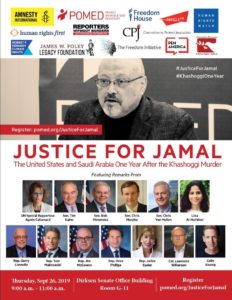 His death, Cengiz added, highlighted how far “human rights have been abandoned in the Arab world … [and] was a blow to everyone fighting for democracy in the region.”

Along with the Middle East’s polarization and integration, its dysfunctional state structures present another risk factor. Some states are more akin to nonstate actors, argues Robert Malley, President and CEO of the International Crisis Group: the central governments in Libya, Syria, and Yemen lack control over large swaths of their territories and populations.

Conversely, several nonstate actors operate as virtual states, including Hamas, the Houthis, the Kurds, and the Islamic State before it was toppled. And these nonstate actors often must contend with nonstate spoilers of their own: in Gaza, Hamas vies with jihadi groups that sometimes behave in ways that undermine its rule or contradict its goals, he writes for Foreign Affairs:

Even in more functional states, it is not always clear where the ultimate policy-making authority lies. Shiite militias in Iraq and Hezbollah in Lebanon, for example, engage in activities that their titular sovereigns don’t control, let alone condone. Weak states cohabiting with powerful nonstate actors creates the ideal circumstances for external interference.

It’s a two-way street—foreign states exploit armed groups to advance their interests, and armed groups turn to foreign states to promote their own causes—that is all too open to misinterpretation, adds Malley, the Obama administration’s White House Middle East Coordinator and Senior Adviser on countering the Islamic State 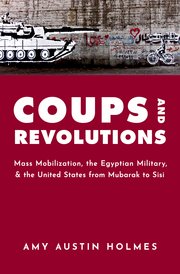 The anti-NGO law “shows that el-Sisi is not just targeting those people who are clearly critical of the regime, but also now the groups that provide basic services, or even work to defend the government’s own laws,” she explains. “To me it says that the regime is so paranoid and afraid of independent initiatives from civil society, regardless of the political orientation, that anything that smacks of independence from the state is a threat.”

Sisi orchestrated a ‘coup from below,‘ she contends in “Coups and Revolutions,” which examines Egypt’s waves of revolution and counterrevolution between 2011 and 2018.

The Arab Spring ushered in dramatic change in North Africa and the Middle East, but democracy has struggled to take hold. Living through the uprisings in Egypt, Amr Hamzawy (above) tells the story of the revolutions and attempted transitions to democracy. Not all is lost, however, as he argues that the youthful energy and activism has simply moved away from politics and will rise once again.

Hamzawy is an Egyptian political scientist and human rights activist. He is a former member of the People’s Assembly after being elected in the first Parliamentary elections in Egypt after the Egyptian Revolution of 2011. He is also a former member of the Egyptian National Council for Human Rights. Hamzawy was a visiting scholar at Stanford’s Center on Democracy, Development, and the Rule of Law (CDDRL) and an associate professor of political science at Cairo University.