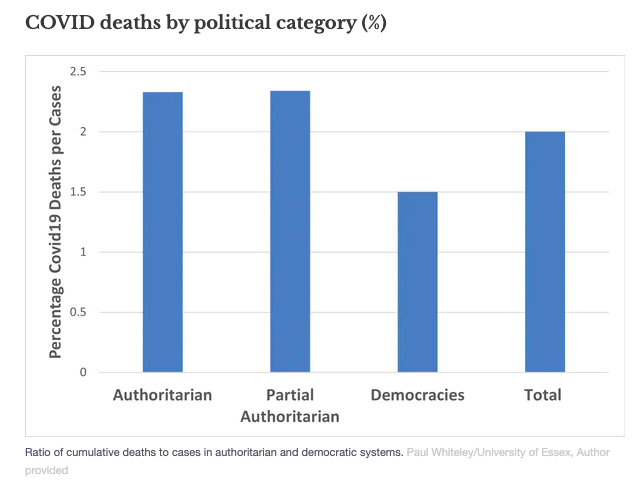 Though it may be surprising to many, democracies have proved that they have the edge in many aspects of the COVID crisis, including the initial containment of spread and compliance with measures designed to limit transmission, notes Justin Esarey, an associate professor of politics and international affairs at Wake Forest University. They are also better at preventing deaths from COVID-19. Democracies have reported more fatalities from the disease than have autocracies, but these reports are complicated by autocracies’ tendency to fudge their data to make things look better.

The bold, resolute governance that autocracy supposedly offers may be tempting …. [but] the glamour of that dark path conflicts with the fact that, despite the negative publicity they have faced, democracies are at least as effective at vaccinating their citizens as non-democracies, he writes for the Atlantic:

Our World in Data, a collaboration between researchers at Oxford University and the Global Change Data Lab, provides up-to-date information on the proportion of each country’s citizens who have received at least one dose of COVID-19 vaccine, as well as on their GDP per capita. Experts from the V-Dem Institute at the University of Gothenburg classify regimes on the basis of their adherence to free elections and protection of individual rights, making it possible to compare the performance of democratic regimes with that of autocratic ones. At the same level of economic prosperity, democracies are on average comparable to or slightly better than their autocratic counterparts in terms of how much of their population has been vaccinated. 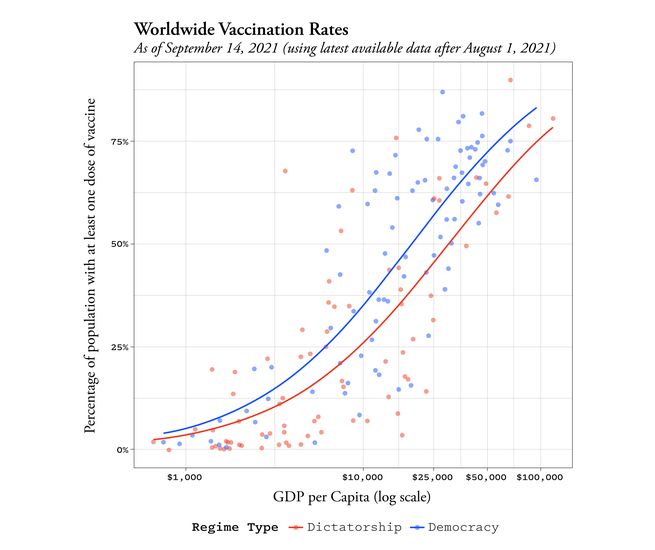 Stanford’s Francis Fukuyama thinks that it is not necessarily democracy but “whether citizens trust their leaders, and whether those leaders preside over a competent and effective state,” that is crucial to defeating a pandemic, Esarey adds.

Authoritarian governments — even in countries with robust welfare systems — cannot respond effectively without stoking popular resentment because of their reliance on force to ensure compliance, argues Zachariah Mampilly, a professor of international affairs at the City University of New York.

This is why both South Africa, once a model of neoliberal democracy now mired in corruption, and Cuba, a paragon of welfare authoritarianism that initially overperformed in its Covid response, have recently faced substantive challenges to their leadership, he writes for the Times.

It’s clear the argument that authoritarian states are superior to democratic states when it comes to dealing with the pandemic is not supported by the most reliable World Health Organization data on comparative death rates, Paul Whiteley of the University of Essex  writes for The Conversation.

Democracies did a better job fighting COVID-19 than the Chinese government would have you believe, Justin Esarey writes… https://t.co/CZCvdWK1Om