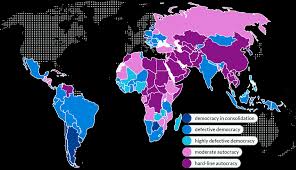 The novel coronavirus pandemic will only exacerbate recent anti-democratic trends, according to a new policy brief from the Bertelsmann Transformation Index (BTI).

While “it is neither foreseeable how fast and far COVID-19 will spread, nor how long the resultant economic and social crisis will last until a vaccine is developed,” BTI says, it is clear “that it will severely strain and probably overburden the often poorly developed health care systems of many of the 137 developing and transition countries examined” by the Index. Some experts “are already predicting that many countries will be set back many years in their development and that hundreds of millions of people are at risk of falling back into extreme poverty.” 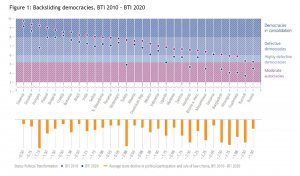 The BTI does offer some modest cause for optimism, detecting increasing resistance to oppressive measures by citizens, as well as continued resiliency among institutions and in civil society that are facing pressure from autocratic regimes, Peter Orvetti writes for Democracy Without Borders.

German political theorist and Nazi Party member Carl Schmitt, a critic of liberalism, writing in the 1920s and ’30s argued that liberal governments are weak when faced with emergency. The technical nature of liberal constitutionalism — our checks and balances — left it unable to deal effectively with exceptional situations, he believed, analyst Stan Grant writes for ABC News:

In his book Political Theology, Schmitt argued that the sovereign “decides whether there is an extreme emergency”. Communist dictatorship, he warned, was better positioned to deal with that exception. Why? Because that dictatorship itself was born out of emergency: revolution. Top down state control is in the DNA of communism, as he wrote in an earlier book Die Diktatur (on dictatorship) “everything is justified that appears to be necessary for a concretely gained success”. 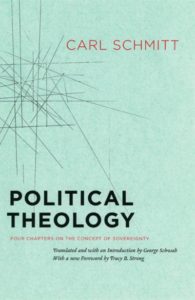 As the coronavirus ravages the world, different political systems are being put to test on their ability to govern, according to Ted S. Yoho and Dr. George Yin. The ability of China to eventually control the outbreak in Hubei Province may lend superficial credibility to the claim that autocracies are better than democracies at managing public health crises. However, democracies across the world have demonstrated their own ability to flatten the curve, with several democratic countries around the world starting to ease lockdown restrictions, they write for the National Interest.

The democratic example of Taiwan is particularly telling, both because of its geographical proximity to the outbreak and the fact that it managed to avoid a lockdown altogether. Specifically, the “Taiwan model” is defined by three characteristics: science-driven policy-making, transparency, and state collaboration with civil society, but …

No autocrat can reliably implement the Taiwan model to combat the coronavirus. As the logic of authoritarian politics ensures that officials cannot afford to be transparent and politics often trump expertise. Furthermore, collaboration with civil society is anathematic to the authoritarian philosophy of governance, which emphasizes top-down control and centralized planning.

Congressman Ted S. Yoho is the Ranking Member of the House Foreign Affairs Subcommittee on Asia, the Pacific, and Nonproliferation.  Dr. George Yin is a Research Associate at the Fairbank Center for Chinese Studies at Harvard University and a Visiting Assistant Professor of the Department of Political Science in Swarthmore College.