From anti-science conspiracy theories to state-sponsored disinformation, the United Nations warns that an “infodemic” of half-truths and falsehoods is undermining the effort to overcome the Covid-19 pandemic. How is social media driving anti-lockdown protests and just how much traction are they getting? France24 asks.

Well before the coronavirus fuse was lit in Wuhan and exploded into a global pandemic, Communist China waged the ideological component of Cold War II for decades without a serious response — until now, argues Joseph Bosco, a former China country director for the Secretary of Defense.

The National Security Strategy (NSS) released in December 2017 identified China and Russia as “revisionist powers that use technology, propaganda and coercion to shape a world antithetical to U.S. interests and values,” he writes for the Hill, citing China’s existential threat to America’s core interests, and Western values generally.

Like the anti-West campaign the Soviet Union conducted during the Cold War, China and Russia today rely heavily on information warfare, adds Bosco, a nonresident fellow at the Institute for Corean-American Studies and a member of the advisory board of the Global Taiwan Institute. According to the NSS, both “weaponize information to attack the values and institutions that underpin free societies, while shielding themselves from outside information. …  They disseminate misinformation and propaganda.”

Evidence revealed last year indicated that some Chinese-language campaigns had begun on platforms like Twitter as early as April 2017, but the latest round of incidents and investigations points to a more definitive shift in Chinese influence operations. It remains to be seen how foreign governments, technology companies, global internet users, and even the CCP’s own propaganda apparatus will adapt to the challenges presented by this change. Whatever their response, it is clear that a new era of disinformation has dawned, she writes for the Diplomat.

Covid-19 has left a trail of destruction everywhere in its wake, but one of its most pernicious impacts is likely to be in the advances made by authoritarian states – and putative authoritarians – against their own populations but also against the free world, the Henry Jackson Society adds. 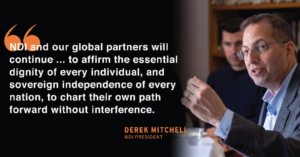 In order to explore what the free world may have missed the HJS welcomes three defenders of the democratic order and opponents of autocracy – Bill Browder, Laura Rosenberger and Dr Daniel Twining – to debate the issues. Using their knowledge of authoritarian state activity and expertise in the areas of human rights advancement and democracy promotion, they discuss “When the World Wasn’t Looking: How Authoritarian States Have Taken Advantage of the Covid-19 Crisis.”

IRI’s Dan Twining also addressed a House Foreign Affairs Committee virtual briefing on Authoritarianism, Disinformation, and Good Governance During COVID-19 (above) with former Secretary of State Madeleine Albright and Derek Mitchell (above), President of the National Democratic Institute. IRI and NDI are core institutes of the National Endowment for Democracy (NED).

This moment may be an inflection point for democracy, according to Secretary Albright’s testimony and Mitchell’s opening remarks.

Disinformation of Russian origin has been confusing people in Poland and elsewhere. But some Polish MEPs begin to use messages that appear to be given to them by ‘friendly’ people, @NEDemocracy partner Visegrad Insight reports.