Cubans have taken to the streets for the biggest anti-government protests in decades, chanting “Patria y Vida” — Homeland and Life — a play on the communist slogan “Homeland or Death,” the Washington Post’s Anthony Faiola reports.

The events demonstrate that the regime is “illegitimate” and the people “sovereign”, said Orlando Gutiérrez, from the Cuban Democratic Directorate. “The day came when the people of Cuba rose up,” added Gutiérrez, who also represents the Assembly of the Cuban Resistance, a platform of opposition organizations.

In a country known for repressive crackdowns on dissent, the rallies were widely viewed as astonishing. Activists and analysts called it the first time that so many people had openly protested against the Communist government since the so-called Maleconazo uprising, which exploded in the summer of 1994 into a huge wave of Cubans leaving the country by sea, the Times adds:

Carolina Barrero, a Cuban activist, went even further. “It is the most massive popular demonstration to protest the government that we have experienced in Cuba since ’59,” she said by text message, referring to the year Fidel Castro took power. She called the public outpouring on Sunday “spontaneous, frontal and forceful.”

“What has happened is enormous,” she added.

The Caribbean island nation of 11 million inhabitants where public dissident is usually restricted has seen a growing number of protests over the past year although nothing on this scale or simultaneously in so many cities, Reuters adds:

The anti-government demonstrations were the largest since the summer of 1994, said Michael Bustamante, an assistant professor of Latin American history at Florida International University. “Only now, they weren’t limited to the capital; they didn’t even start there, it seems.”

Opposition artists and independent journalists have said for weeks that the government has maintained police patrols outside their homes, while reports persist of patients who could not be transferred to hospitals on time due to lack of transportation and resources, NBC News reports:

“Take these patrols to transport the sick, open the hotels to house them, facilitate the arrival of donated medicines and medical utensils,” poet and activist Katherine Bisquet said from Havana, pointing out a police car stationed in the basement of the building…… In Cuba, videos broadcast on social networks, which could be verified by Noticias Telemundo, show special agents known in Cuba as Black Berets, being deployed in some localities and violently detaining civilians who protested and sang peacefully.

Could communism fall in Cuba? DW News asks (above).

The unrest frames a key question: Can authoritarian regimes survive? Gerald F. Seib asks in the WSJ. “In the long term, you would expect autocrats to pay the price,” says Freedom House president Michael Abramowitz. “The problem is, the long run can be a very long time.”

White House National Security Advisor Jake Sullivan tweeted support for the Cuban people Sunday night saying, “the U.S. supports freedom of expression and assembly across Cuba, and would strongly condemn any violence or targeting of peaceful protesters who are exercising their universal rights,” CNN adds.

“For decades, Cuba’s dictatorship has used violence and repression to silence its people, rather than permit the free exercise of democracy and their basic social rights,” said Senate Foreign Relations Committee Chairman Bob Menendez. “This must end. The world’s eyes are on Cuba tonight and the dictatorship must understand we will not tolerate the use of brute force to silence the aspirations of the Cuban people.”

The Communist authorities responded by unleashing ‘Communist revolutionaries’ on to the streets to foment violence. 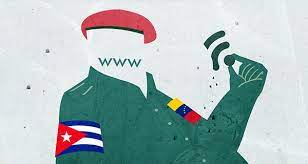 Witnesses said Cuban security personnel deployed tear gas and other forms of force to disperse crowds, using vehicles to detain dozens of people. There were reports of multiple people wounded, as security forces and pro-government counterdemonstrators clashed with protesters, the Post adds:

“I have never seen such a protest in my life,” said Noel Alonso Ginoris, 26, a writer and member of Havana’s San Isidro artists movement that has sought to challenge government authority….. Norges Rodríguez, co-founder of YucaByte, a website on Cuban affairs, said the protests appeared to be the result of a spontaneous “domino effect” from San Antonio de los Baños, 16 miles from Havana, outward. Videos shared on social media from the scene showed Cuban security forces manhandling protesters.

The Biden administration said it was deeply concerned by the government’s response, the WSJ reports:

“We stand by the Cuban people’s right for peaceful assembly. We call for calm and condemn any violence,” said Julie Chung, the State Department’s senior official in charge of Latin America…. Kentik, a U.S.-based network monitoring company, reported countrywide internet outages. Young Cuban civil-rights activists have used social media, which appeared on the island only recently, to organize protests and reach a far wider local audience than would have been the case a few years ago.

“People are at the point when things explode, and when they explode it’s difficult to control,” said Alejandro de la Fuente, a Cuba expert at Harvard University. “This is the internet at work,” said Mr. de la Fuente. “People are communicating and going out to the street.”