Is our personal data safe? And might it be used by individuals, companies or governments to influence the democratic process? BBC media editor Amol Rajan asks:

These are the two fundamental questions at the heart of the revelation that 50 million Facebook users allegedly had their personal data harvested by Cambridge Analytica, following investigations by Channel 4 News, The Observer and The New York Times.

If the answers are “no” and “yes” respectively, as all the early evidence appears to indicate, the implications are immense, he adds.

“Fake news” was not a term many people used 18 months ago, but it is now seen as one of the greatest threats to democracy, free debate and the Western order, reports suggest.

Russia never would have been able to conduct “information warfare” in the way it did in the 2016 presidential election without Facebook, Twitter and Google, according to Roger McNamee, an early investor in Facebook and Google, Norman Eisen, chair of Citizens for Responsibility and Ethics, and Fred Wertheimer, President of Democracy 21. Today, any hostile power or other malicious actor can follow the Russians’ “information warfare” playbook, and it is likely that others will do so, they write for USA Today.

Vladimir Putin’s re-election – or ‘coronation’ – marked the culmination of his nearly two-decades-long project to control information in Russia and manipulate Russian society, according to Alina Polyakova, a fellow at the Brookings Institution and an adjunct professor at Johns Hopkins University.

Before the Kremlin unleashed its notorious Internet Research Agency (IRA) troll factory on the 2016 U.S. elections, it was busy testing its arsenal of disinformation tools on Russians, she writes for the Atlantic:

Moscow’s specific focus on online operations began after the 2011 protests against election fraud, which brought 100,000Russians to the streets of Moscow. The protests coincided with Putin’s return to the presidency in 2012 following a brief stint as prime minister. Reports suggest that it was at this point that the Kremlin launched what eventually became the IRA. …In 2015, when an undercover Russian investigative reporter infiltrated the IRA, it employed approximately 400 individuals. Today, it has ballooned to almost 1,000 employees and has moved to a new office three times the size of its original space.

This expansion was planned in preparation for the March presidential elections. In the lead-up to the vote, the 900 or so Russian trolls, state-owned media outlets, and government officials, together deployed a coordinated and structured disinformation campaign. It had several themes: to deny any allegations of election fraud, to scare or entice Russians into voting to bolster turnout, and to blame all signs of dissent or corruption on the West and the Russian opposition (which, the Kremlin believes, the West controls).

Blockchain is a confusing technology with a simple purpose: enabling groups that don’t trust each other to trade things or validate information without an all-powerful middleman, writes Chris Doten, a Senior Manager for the National Democratic Institute’s Information and Communication Technologies. Blockchain provides a useful way to empower groups to work together and define what truth is, he contends. RTWT

If civil society organizations, news media, researchers, and technology companies work together, we can increase resilience to disinformation by investing in media and information literacy, increasing the supply of credible information, better understand the threats at hand, limit the dissemination of harmful information online, and help people find quality news, argues Rasmus Kleis Nielsen, director of research at Reuters Institute for the Study of Journalism at Oxford and a co-author of the recent High Level Expert Group report on Fake News and Disinformation (right). 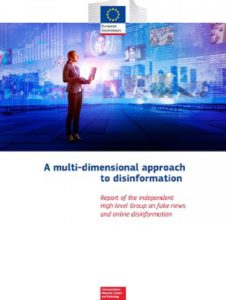 Meanwhile, the role of governments and institutions such as the European Commission in such a soft power approach should be to encourage and support collaboration to counter disinformation and increase resilience — not to try to use hard power to directly

crack down on a poorly defined and perhaps necessarily unclear problem, he writes for NiemanLab.

The Russian government’s response to the accusation that it was probably behind the poisoning of former spy Sergei Skripal followed a pattern which the Atlantic Council’s @DFRLab has observed in other cases in which the Kremlin was accused of serious crimes. That pattern was the “4D” model: dismiss, distort, distract, dismay…. Read  More →