Li Baiguang, a Christian human rights lawyer who had met regularly with high-level officials in the United States, died at the Number 81 People’s Liberation Army Hospital in Nanjing, eastern China, a source with direct knowledge of the case told Reuters.

“After a sudden outbreak of illness, the efforts to save him failed, and he passed away. He had not done a health check recently, so we do not know if there was a long-term cause,” the source said, requesting anonymity due to the sensitivity of the case.

Li Baiguang, (left, with President George W. Bush), was a well-known lawyer who defended farmers and Christian pastors, work that garnered him an award (above) from the Washington-based National Endowment for Democracy in 2008, the AP adds:

He died just hours after being admitted to No. 81 People’s Liberation Army Hospital for a minor stomach ache, a relative of Li’s told Bob Fu, a religious activist who has known the lawyer for over a decade. Fu said in a statement through his U.S.-based Christian nonprofit group ChinaAid …. Fu and Li attended the National Prayer Breakfast in Washington together earlier this month. Li’s work defending arrested Chinese pastors often prompted death threats, Fu said. The lawyer had suffered injuries while allegedly being beaten by plainclothes security agents in October.

Li had been “treated violently last year” and “threatened a number of times recently by the Chinese regime,” Fu said.

“When we honored him with the NED’s Democracy Award in 2008, we noted that he had been detained and physically attacked many times for his work, the first time in 2004 when he had brought legal action on behalf of 100,000 peasants who had been forcibly evicted from their land,” said NED president Carl Gershman (above, far left).

“Given this history, and reports that he very recently appeared to be in good health, it is essential that an independent and impartial investigation into Li’s death be carried out before anyone accepts the official claim by Chinese authorities that Li Baiguang died from natural causes,” he added. 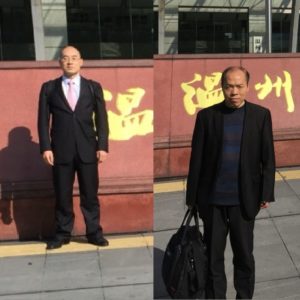 “In the past 3 decades, China has achieved rapid economic development but political reforms remain relatively stagnant, and in some aspects have even deteriorated. The result of a lack of supervision and checks and balances within China’s one party system is that China is lagging behind in advancing freedom, democracy, human rights, and rule of law,” Baiguang told the NED. “However, my experiences tell me, that using law to protect citizens’ rights and freedom can play a role in restricting abuses of official authority and in empowering citizens in China.”

With the traditional press tightly controlled, the job of reporting on rural protests and mass disturbances has been taken up increasingly by members of China’s emergent civil society–activists, lawyers, and intellectuals who believe strongly that the information deserves a place in the public debate, and who work outside the censorship machine.

“Farmers want to use the media, but the media can’t report their issues. Often, with the help of scholars and lawyers, the news comes out in overseas Web sites,” said Baiguang, who was one of several human rights lawyers and activists placed under house arrest to prevent meeting a US Congressional delegation visiting China..

Li Baiguang joined with other lawyers, including Fan Yafeng, Gao Zhisheng, and Teng Biao (right) to promote the rule of law with respect to religious belief and practice by raising house church leaders’ awareness of their legal rights, and by demanding that the government comply with the Chinese Constitution, Regulation on Religious Affairs, Criminal Law, Criminal Procedure Law, and other relevant laws and regulations, according to the Congressional-Executive Commission on China:

Other Chinese lawyers and legal advocates who have used constitutional law to promote the rule of law and human rights in China have faced official repression. For more information on Protestants in China, see the CECC 2005 Annual Report, Section III(d).

“We do not know for certain whether those injuries may have contributed to his declining health, but the Chinese government should, as a party to the U.N. convention against torture, conduct a prompt and impartial investigation to determine whether those injuries may have played a role in his untimely death,” said William Nee, a China researcher for Amnesty International.

“The government has the obligation to ensure that lawyers can carry out their professional duties without fear of intimidation or interference, and without being identified with their clients and causes,” Nee said.