It was a quarter of a century ago this week, on February 26, 1993, when a group of jihadist terrorists, some of whom had trained in Afghanistan, tried to bring down the Twin Towers and to kill the many thousands of Americans working there, notes Peter Bergen, CNN’s national security analyst, a vice president at New America and a professor of practice at Arizona State University.

In early 2011, as the Arab Spring revolutions were just beginning, a New York Times article concluded that for most analysts, “the past few weeks have the makings of an epochal disaster for Al Qaeda, making the jihadists look like ineffectual bystanders to history while offering young Muslims an appealing alternative to terrorism,” notes Daveed Gartenstein-Ross, a senior fellow at the Foundation for Defense of Democracies. The vast majority of terrorism experts believed the revolutions sweeping the Middle East and North Africa were the death knell not only for regional despots, but also for the jihadist movement, he writes for War On The Rocks:

In fact, the opposite occurred. The significant spike in terrorism in Africa since the onset of the 2011 Arab Spring revolutions is as undeniable now as it was unanticipated at the time. The numbers speak for themselves. In a new study titled Evolving Terror, three colleagues and I found that between January 2007 and December 2011 — as the impact of the Arab Spring revolutions was just beginning to be felt — jihadists carried out 132 successful, thwarted, or failed attacks against Western interests in Africa. This figure nearly tripled to 358 attacks between January 2012 and October 2017. 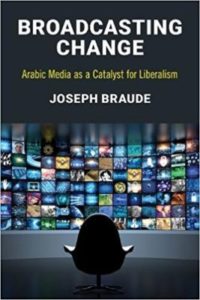 In his new book, Broadcasting Change: Arabic Media as a Catalyst for Liberalism, Joseph Braude (above) explores the growing influence of liberalism in Arab media – an important counter to the radical Islamists, FPRI adds. How significant are these new voices for change in the Arab world? What kind of changes can they usher in?

“Some Saudis outside the government, primarily media figures, have been trying to counter extremist ideologies in their midst for some time,” Braude told a recent Policy Forum at The Washington Institute for Near East Policy (above). In recent years, they have expressed optimism about Riyadh’s new policies and are very interested in international partnerships to improve their effectiveness. These are not dissidents; they are establishment voices pushing the boundaries of the small space they have been given.

The Indonesian government is bringing together dozens of convicted Islamic militants and survivors of attacks in what it hopes will be an important step in combating radicalism and fostering reconciliation, the Associated Press adds:

About 120 reformed militants will apologize to dozens of victims including survivors of the 2002 Bali bombings and the 2004 bombing of the Australian Embassy in Jakarta, according to Irfan Idris, director of de-radicalization at Indonesia’s counterterrorism agency. The three days of meetings at a Jakarta hotel that began Monday aren’t open to the media except for an event on the final day.

“Many militant convicts have changed and are taking the right course with us by drawing on their experience to prevent others from taking up violence,” Mr. Idris told The Associated Press. “These facts have inspired us to reconcile them with their victims.”

But its efforts at convincing imprisoned militants to renounce violence have had mixed results. In overcrowded and understaffed prisons, militants have been able to convert other prisoners to radicalism and communicate with supporters on the outside to encourage new attacks that they believe will advance their cause of transforming Indonesia into an Islamic state. 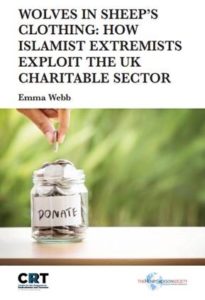 Radical extremists are taking advantage of the UK’s charitable sector, according to a new report from the Henry Jackson Society. “Wolves in Sheep’s Clothing: How Islamist Extremists Exploit the UK Charitable Sector” makes a number of recommendations, including:

“This report illustrates how these charities operate like a cartel, with extremist speakers involved in multiple organisations, presenting themselves as the voice of ‘true’ Islam and squeezing out moderate voices,” said Emma Webb, Research Fellow at the Centre for the Response to Radicalisation and Terrorism at the Henry Jackson Society. “Action is needed now if we are to stop this network of Islamist extremists from continuing to use charities and taxpayers’ money to fund the spread of divisive, illiberal and intolerant views within our own communities,” she added.

Islamist’s own track record over the past four decades should provide ample fodder for informed policy deliberation, argues analyst Ahmed Chara. Sunni Islamists have now had the chance to govern, rule, or call the shots in Afghanistan, Egypt, Gaza, Libya, Sudan, Tunisia, Turkey and portions of Syria and Iraq. In each of these locations, ordinary people who have lived under their rule attest to the same four tragic outcomes, he writes for The Hill:

Governments must move away from the improvisational nature that has come to define domestic CVE efforts to better reduce potential influence of foreign terrorist cells. This should include more research into CVE and contested concepts, such as radicalism and radicalization, analyst Madeleine Nyst writes for the Lowy Institute’s Interpreter:

Positive steps have recently been made. In May, the Australian Government commissioned a report from GSDRC that sought to better understand the crucial role women can play in the CVE process on a community level. Research at the Australian National University, funded by the Australian Research Council, is aimed at developing better counterterrorism strategic communications efforts so as to counter violent extremist propaganda. Yet more should be done.

Research has the potential to strengthen CVE initiatives, and community-based research (such as the GSDRC report) offers an especially good fit in light of the challenges governments face in implementing CVE policies and programs, Nyst adds.

Social media has a crucial role to play as well, argues Hudson institute analyst Samuel Tadros. Even as the Sisi government attempts to control the traditional news media, alternative outlets like YouTube are having an impact. Many parodies of Islamic State videos have gone viral, serving as a powerful tool against the group’s Islamist narrative. Wider use of alternative media could provide a serious means of countering toxic ideas, he told the WINEP forum.

For jihadist groups, the ability to innovate is a necessity rather than a luxury. As preeminent terrorism scholar Bruce Hoffman (right) has noted, terrorist groups have a “fundamental organizational imperative” to learn, Gartenstein-Ross adds:

Facing an array of internal and external challenges, these groups must adapt quickly and creatively or suffer the consequences. Militant groups that fail to address their vulnerabilities in the face of offensive counterterrorism operations will eventually be degraded to the point of strategic irrelevance. Similarly, organizations that cannot overcome defensive counterterrorism measures — policies aimed at preventing attacks — will become obsolete as more adaptive competitors exploit weaknesses in states’ security architectures.

In this war of ideas, the independent roles of norms are seen to affect international and domestic policy outcomes, a belief adopted by the constructivists’ school of thought in international relations. It should be realized that the war of ideas is largely a struggle within the Muslim world and the best chances for winning the war lies in supporting and aligning with the true religious authority and legitimacy of Islam itself.

Fascism and communism had their runs, and remain discredited. Islamic theocracy does not resonate with the political consciousness of the non-Islamic world, and for that matter is not very popular across most of the Islamic world. Where Sunni Islamists have taken power, in Sudan and Afghanistan in the 1990s and in parts of Iraq and Syria more recently, they have failed to govern effectively. Radical jihad is a virulence that will be with us for a long time, but it is not the reason freedom is on the decline around the world.

What has emerged and is spreading is what can be called “sham” democracy, or a form of authoritarianism that cynically pays lip service to democratic norms, Bray adds.

“In recent months, working together, we have made enormous strides in preventing terrorist attacks, denying terrorists control of their territory and populations, cutting off their funding, and discrediting their wicked ideology,” said National Security Adviser H.R. McMaster (right).

“Over the past year, we have come together in partnership to create two new centers in Saudi Arabia dedicated to countering jihadist ideology and inhibiting terrorist financing,” he told the Munich Security Conference. 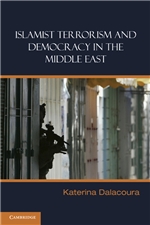 The putative relationship between political repression and terrorism remains a matter of active debate in scholarly and policymaking circles,  USIP notes, with respect to Katerina Dalacoura’s Islamist Terrorism and Democracy in the Middle East:

Based on investigations into individual Islamist movements and the political environments in which they operate, this study assesses whether the emergence of Islamist terrorism is linked to the absence of political participation and repression.

Qatar supports Brotherhood groups throughout the region with money and advocacy by its vast media arsenal, which includes Al Jazeera television., notes analyst Hussein Ibish. Qataris argue that these are not only legitimate political parties but an indispensable alternative to radicalism, since without supposedly “moderate” Islamist groups like the Brotherhood, religious conservatives are more likely to be drawn into the orbit of violent extremists, he writes for Bloomberg:

The Saudi-led quartet rejects this. To the contrary, they argue, these so-called “moderates” don’t present an acceptable alternative to radicalism but rather pull politically-oriented fundamentalists down a path toward extremism. The Muslim Brotherhood, they argue, shares key assumptions and long-term ambitions with overtly terrorist groups, including the goal of re-establishing a caliphate. This view holds that Brotherhood ideology is a crucial source of the logic and substance of terrorist creeds, and thus is a cause of deadly political cancer. The quartet accuses Qatar and Turkey of leading a Sunni Islamist camp that competes with both the Arab mainstream and Iran’s Shiite alliance.

Qatar views the less extreme end of the Islamist ideological spectrum as legitimate and necessary, while the quartet sees the entire spectrum as intolerably dangerous, Ibish adds.