A new analysis challenges the “enduring myth” that the European Union’s eastern member states are less favorable to the democratic values set out in Article Two of the Treaties of the EU than those in western Europe.

Voters in countries such as Hungary, Poland, and Romania see the EU’s role in protecting democracy, the rule of law, and human rights as vital, say European Council on Foreign Relations analysts Ivan Krastev,* Mark Leonard & Susi Dennison. But there is also a great power dimension to their concerns: voters in France, Germany, Austria, Spain, Denmark, and Italy value the EU’s ability to counter the US and China. Finally, citizens of the three Scandinavian EU members, together with the Netherlands and Austria, appreciate the EU’s role in tackling climate change, according to ECFR’/YouGov polling:

When asked what the greatest loss would be were the EU to fall apart tomorrow, the protection of human rights, and of the rule of law and democracy, were among the top answers across Europe, at 20 percent and 18 percent respectively. However, when this is broken down by member state, it is by no means just citizens in the west who are preoccupied with such issues. Thirty-three percent of Hungarians saw the loss of protection of democracy and rule of law as a major problem, compared to just 11 percent in France. On the protection of human rights, the figures were 33 percent in Hungary and 32 percent in Romania, compared to just 17 percent in Germany, 16 percent in Italy, 15 percent in France, and 13 percent in the Netherlands. 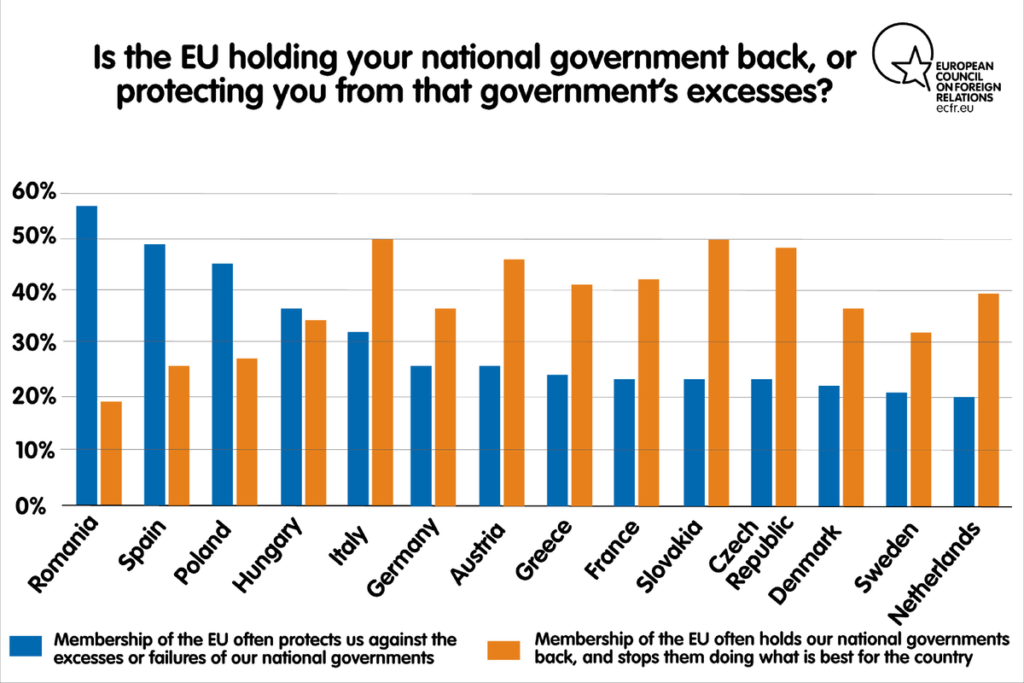